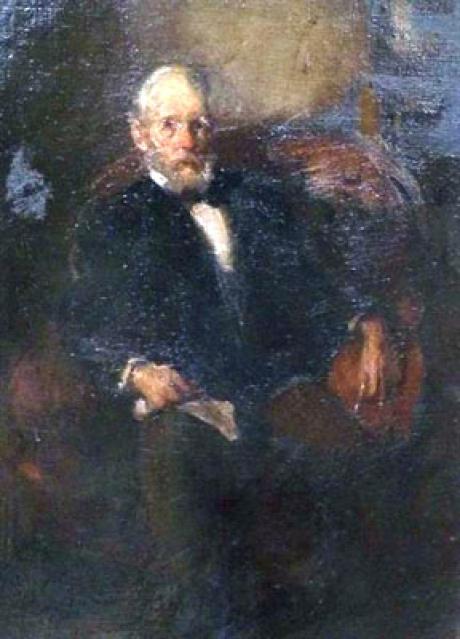 Brown, Alexander Crum (1838–1922), chemist, was born in Edinburgh on 26 March 1838, the only son of a United Presbyterian minister, John Brown (1784–1858), and his second wife, Margaret Fisher Crum (d. 1841), sister of the chemist Walter Crum FRS (1796–1867) and a descendant of Ebenezer Erskine. His half-brother, John Brown MD (1810–1882), was famed as an author; their grandfather was John Brown of Whitburn (1754–1832), and their great-grandfather was John Brown of Haddington. Crum Brown, as he was generally known, spent five years at the Royal High School, Edinburgh, then went to Mill Hill School, Middlesex. He entered the University of Edinburgh in 1854 to study arts, but changed to medicine, and was a gold medallist in chemistry and natural philosophy. He graduated MA in 1858 and MD in 1861. He simultaneously studied science at London University where he gained his DSc in 1862. In the following year he went to Germany to study chemistry, under Bunsen at Heidelberg and Kolbe at Marburg. He returned to Edinburgh to teach medical students, as extramural lecturer in chemistry in 1863 and professor from 1869 to his retirement in 1908. He obtained his FRCP (Edinburgh) in 1865. In 1866 he married Jane Bailie (d. 1910), daughter of the Revd James Porter of Drumlee, co. Down. There were no children.

In keeping with his medico-chemical interests, Crum Brown's Edinburgh MD thesis, ‘On the theory of chemical combination’ (1861), proposed a new way to represent chemical constitution: each atom was to be indicated by the chemical symbol for the element concerned, bonds between atoms being symbolized by lines. Essentially this was the system of notation later employed universally. For clarifying atomic relationships within a molecule, according to the new valency theories of Edward Frankland and Kekulé, this simple device was of untold value and greatly facilitated the emergence of the theory of structure upon which later chemistry was predicated. It transformed the teaching of organic chemistry, particularly in the hands of Frankland, becoming known, somewhat unfairly, as ‘Frankland's notation’. The system was introduced to a wider audience at a lecture on chemical constitution and its relation to physiological action, reported in Chemical News complete with the new ‘graphic formulae’. His name is remembered now chiefly for the Crum Brown–Gibson rule, enunciated with his assistant J. Gibson (1855–1914) in 1892, concerning substitution in a benzene molecule.

Though his most enduring concern was the establishment of a truly mathematical theory of chemistry (in which he was unsuccessful) Crum Brown also worked on optical activity, organo-sulphur compounds, and electrolytic synthesis of half-esters. He wrote on the physiology of the inner ear, where he correctly related vertigo to the motion of fluid in channels of the inner ear. He was proficient in Japanese, and an expert in systems of knitting. His other interests included the university senate, the Royal Society of Edinburgh, and the synod of his church. He was the first holder of a London DSc (1862), received honorary degrees from all four Scottish universities, and became FRSE in 1863 and FRS in 1879. He was president of the Chemical Society from 1891 to 1893. Crum Brown died on 28 October 1922 at his home, 8 Belgrave Crescent, Edinburgh.

Walton, Edward Arthur (1860–1922), painter, was born at Glanderston House, Neilston, Renfrewshire, on 15 April 1860, the sixth son and ninth child of Jackson Walton (c.1808–1873), variously merchant, commission agent, engineer, and amateur artist, and his second wife, Eliza Anne (1826–1902), daughter of Thomas Balfour Nicholson. Walton was brought up in Glasgow from 1862; nothing is known of his early education but in 1876–7 he studied at the Staatliche Kunstakademie, Düsseldorf. From 1877 to 1879 he also studied at Glasgow School of Art. In 1879 his brother Richard married Judith Crawhall of Morpeth and at the wedding Walton met her brother Joseph Crawhall and his friend James Guthrie. For the next ten years these three men spent much of their spare time in each other's company, at first taking summer holidays together painting (Crawhall and Guthrie being apprenticed to John Pettie until 1881) but from 1882 making longer and more sustained contact in Lincolnshire, Glasgow, Berwickshire, and Kirkcudbrightshire. Like Guthrie, Walton fell under the influence of Jules Bastien-Lepage, a French naturalist painter, and Walton also adopted his manner of plein-air painting with an emphasis on scenes from rural life. Together, Walton, Crawhall, and Guthrie formed the most important of the various coteries of artists who made up the Glasgow Boys in the 1880s. His work, alongside that of Guthrie, George Henry, and John Lavery, defined this particular branch of naturalist painting and identified him with the Glasgow school of painting in its many international exhibitions between 1885 and 1914.

From 1880 Walton had a studio in Glasgow, first at 134 Bath Street. Walton and Guthrie began to exhibit at the Glasgow (later Royal Glasgow) Institute of the Fine Arts, where their reputation grew, and also, in Walton's case, at the Royal Scottish Society of Painters in Watercolour. Walton was a fine watercolourist, as were several of his siblings, and his earliest important works of this period, including Winchelsea (priv. coll.), At Rosneath (Glasgow Museums), Grandfather's Garden (priv. coll.), and The Herd Boy (priv. coll.), are often watercolours. Although all of these were painted in a naturalist manner, Walton was not committed just to painting working-class rural life; several of his best works of the period, again in watercolour, depict the daily lives of the ladies of middle-class society in Helensburgh, such as Victoria Road, Helensburgh (priv. coll.) and En plein air (priv. coll.).

Walton also painted in oils and produced a striking portrait of Joseph Crawhall (1884; NG Scot.) and several paintings at Cockburnspath, where he worked with Guthrie in the summers of 1883–5. A Daydream (1885; NG Scot.) is his masterpiece of this period, first shown at the Glasgow Institute in 1887 and later that year at the New English Art Club, London, when Walton was elected a member. It stands alongside key works by Guthrie in defining the particular qualities of the success of the Glasgow Boys in the 1880s. In 1889 he was elected associate of the Royal Scottish Academy and a full academician in 1905. Walton also took part in an exhibition of Glasgow school painting at the Grosvenor Gallery, London, in 1890, which received much press attention, and which led to the Glasgow Boys being shown in the major cities of Europe and the eastern United States of America.

On 2 June 1890 Walton married Helen Law (1859–1945), widow of Thomas Law and daughter of James Henderson. Their eldest child was the painter and illustrator Cecile Walton, and their second son was the physiologist Arthur Walton. Also in 1890 Walton took a leading part in the initiative organized by the Glasgow Art Club to persuade Glasgow corporation to purchase James McNeill Whistler's portrait of Thomas Carlyle. Having secured Whistler's agreement to the sale, the Art Club then petitioned Glasgow corporation to acquire the painting for its civic collection. The corporation agreed and the painting was purchased, not without some typical bluster by Whistler, in April 1891, the first painting by Whistler to enter any public collection, predating the purchase of the portrait of Whistler's mother by the Musée du Luxembourg. Walton was instrumental in the negotiations with Whistler and the contacts he made were no doubt a factor in Walton's decision to leave Glasgow in 1893 and settle in London. Several of the leading members of the Glasgow Boys had already left, or were considering it, all of them spurred on by the opportunities for new portrait commissions in London, and by the waning market for paintings in Glasgow.

Walton moved first to 22 Cromwell Road, London, later commissioning a house from C. R. Ashbee at 73 Cheyne Walk. His immediate neighbours there were Whistler and Philip Wilson Steer. Walton's career was thriving and he continued to receive portrait commissions and to sell his paintings to collectors and museums in Europe and America. He was also at work on a large mural panel, 15th Century Glasgow Fair, commissioned in 1889 by Glasgow corporation for the Banqueting Hall of the new City Chambers, which he delivered in 1901. Through his friendship with Whistler, Walton was instrumental in persuading him to accept the role of president of the newly formed International Society of Sculptors, Painters, and Gravers, founded in London in 1897. On Whistler's death in 1903, Walton was one of the pallbearers at his funeral.

In 1902 James Guthrie became president of the Royal Scottish Academy. After years of rivalry between Scottish painters of the east and west coasts a Glasgow artist had finally become president, but Guthrie felt exposed and insecure. He asked Walton to return to Scotland to give him practical and spiritual support and in July 1904 Walton moved to Edinburgh, settling at 7 Belford Park. Walton and Guthrie resumed their close friendship and Guthrie diverted to his old friend many of the portrait commissions that academy business prevented him from accepting. His list of sitters began to rival Guthrie's, including Andrew Carnegie (1911; University of St Andrews) and J. G. Bartholomew (NG Scot.). At the same time he resumed his painting of landscape, particularly of Galloway, and he held several exhibitions of these paintings, usually at Alexander Reid's gallery in Glasgow. These later paintings, although usually made en plein air, have little of the realist brushwork or palette of the paintings of the 1880s and show a move towards a more impressionist manner.

In 1922 Walton contracted influenza and, although seeming to make a good recovery, died suddenly of heart failure at his home in Edinburgh on 18 March 1922. Guthrie was a pallbearer at his funeral and two years later organized a memorial exhibition, shown in both Glasgow and Edinburgh.