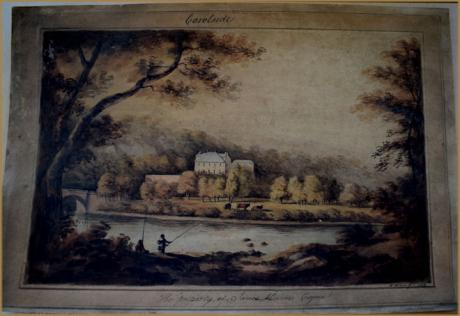 Carolside is an estate by the Leader Water, in the Scottish Borders. It is located 1.5 kilometres (0.93 mi) north of Earlston, in the former county of Berwickshire. The late-18th-century house is a category B listed building,and is set in a former deer park. It was based on a design for Chesterfield House, Mayfair, London by the architect Isaac Ware.The drawing room contains a fireplace designed by Pietro Bossi, taken from Baronscourt, Co. Tyrone, around 1948. Park Bridge a ballustraded arched bridge spans the River Leader and compares with other bridges designed by Alexander Stevens and William Elliot.

The gardens include a national collection of pre-1900 Gallica roses, and are open to the public in July each year, as part of the Scotland's Gardens scheme.Also on the estate is Park Bridge, a balustraded arch bridge linking the policies of Carolside House and those of Leadervale on the other side of the Leader. The bridge dates to the late 18th century, and has been compared with other bridges designed by Alexander Stevens and William Elliot. The magnificent gardens comprise lawns, shrubberies, mixed borders, a secret garden, a winter garden and an oval walled garden housing a historical collection of ancient roses including pre-1900 Gallica roses. Kenneth Cox in his book "Scotland of Gardeners" describes Carolside as "One of Scotland's finest private gardens"

The property was left to Captain R.C.P. Hamilton by his Aunt (nee Hamilton of Roundwood ) / firstly Mrs A.I. Mitchell and secondly Mrs J.W. Ferguson. She/ had no children. The property was sold to Sir J. Gilmour Bart in 1947.