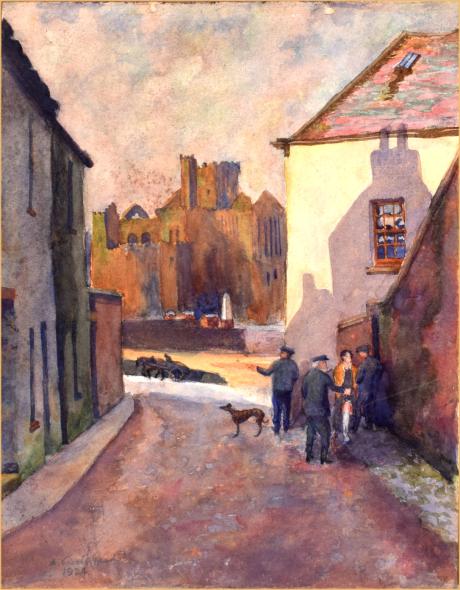 Peel is a seaside town and small fishing port on the Isle of Man, in the historic parish of German but administered separately. Peel is the third largest town on the island after Douglas and Ramsey but the fourth largest settlement, as Onchan has the second largest population but is classified as a village. Until 2016 (when it was merged with Glenfaba) Peel was also a House of Keys constituency, electing one Member of the House of Keys (MHK), who, from September 2015, was Ray Harmer. Peel has a ruined castle on St Patrick's Isle, and a cathedral, seat of the Diocese of Sodor and Man (the diocese was founded when Mann was ruled by the Norse).

Peel was the de facto capital of the island before 1344 (when the King of Mann moved his home and military base from Peel Castle to Castle Rushen). Peel is the island's main fishing port and Peel Cathedral is the seat of the Bishop of Sodor and Man.

Peel is sometimes referred to as the "rose red city", due to the red sandstone used to build the castle and other important buildings. As it is in the west, it is also called the "sunset city". Peel is a popular seaside destination for Manx residents and visitors in summer. It has narrow streets of fishermen's cottages and a Victorian promenade which was built on reclaimed land and a small construction line built for this purpose, as well as sandy beaches. For many years the main industries in the town were fishing, trading and shipbuilding.

There is evidence of local settlers in the Mesolithic Age on both St Patrick's Isle and the nearby Peel Hill, and Neolithic farmers are believed to have settled in the area.

About 550, a Celtic monastery was founded on St Patrick's Isle. Excavations in the 1980s found a large early Christian burial ground, many of the burials dating from around 550. Some later graves had Norse burial goods: e.g. the 'Pagan Lady'. The ruins of the original Peel Cathedral (c.1250) can be seen within the walls of Peel Castle on St Patrick's Isle. This replaced an earlier church.

Norsemen first came to Mann around the year 800, and ruled the Isle for four-and-a-half centuries before finally ceding it to the King of Scotland in 1266. Norsemen settled in Peel and used the harbour on the River Neb as a shelter for their longships. In 1228 Olaf the Black, King of Mann and the Isles, beached his fleet in the inlet. It was attacked and burned by his half-brother Ragnald. In 1266, as agreed in the Treaty of Perth, Norway's King Magnus VI ceded the Isle of Man to Scotland. The island came under English control in the 14th century.

The town of Peel developed on the east bank of the river and the settlement was known as Holmtown until the 17th century. Later development, apart from the late 19th century guest house building on the sea front, has been inland, away from the coast. Peel Castle would eventually become a joint seat of government with Castle Rushen until the mid-17th century[citation needed]. The name Peel was given to the castle by the English rulers, and the settlement then became Peeltown until about 1860. By the time the local councils were established in 1883, the name Peel referred to the town rather than the castle. In the 19th century, schooners built in Peel traded around northwest Europe and Peel fishing boats fished around the island and further afield to the southern coast of Ireland and near to Shetland. The harbour and breakwater were gradually improved, with much of the local income derived from the export of salted herring. By the 1880s, fishing was the main employer with about 3,000 men and boys employed, with ancillary businesses such as shipbuilding providing employment to hundreds more. However, with what is now seen as over-fishing, the number of boats leaving for Ireland dwindled from 300 in 1880 to a handful by 1915.

After the railway arrived in Peel in 1873, Peel started to develop as a tourist resort, with guest houses and hotels built along the shoreline and headlands, and then the promenade was added. Tourism gradually grew in the town. During World War I Knockaloe Farm, at Patrick to the south of the town, was made into the Knockaloe internment camp and housed up to 30,000 German, Austrian and Turkish civilians. In 1940, guest houses at one end of the promenade were requisitioned to become Peveril Internment Camp, housing those suspected of having sympathy for the Nazi regime under Defence Regulation 18B. By the late 1960s the Peel to Douglas railway line had closed and tourism saw a decline. Fishing from Peel has seen periods of upturn and decline. For a number of years the annual Viking Festival has attracted visitors to the resort.[10] In 1979 Odin's Raven, a replica of a Viking longship, sailed from Norway to Peel to commemorate the millennium of the first sitting of the Isle of Man's Parliament, Tynwald. In 2005, a new floodgate was installed at Peel to retain the waters of the River Neb and thus enable the moored boats to float at low tide.

Peel is the birthplace of Peel microcars, made by the Peel Engineering Company in the 1960s, the only Manx cars ever built.

Peel Castle is on St Patrick's Isle, a small island connected to Peel Hill by a causeway. It is thought that the castle was started by Magnus Barelegs (King Magnus III of Norway, also known as Magnus Barefoot) and then extended in 1392 by William le Scrope, 1st Earl of Wiltshire. The Castle is now a tourist attraction open in summer. There is a public footpath around the castle. Archaeological investigations have uncovered evidence of a cemetery dating to around AD 550, and Norse fortifications. The "Pagan Lady" burial discovered within the castle grounds was a Christian-style grave but with various grave goods in the Norse style, including a necklace of beads traded from various countries in Europe and the Mediterranean. No pagan Viking-age burial in the British Isles has produced grave goods of such high quality.

The Isle of Man sometimes referred to simply as Mann , is a self-governing British Crown dependency in the Irish Sea between Great Britain and Ireland. The head of state is Queen Elizabeth II, who holds the title of Lord of Mann and is represented by a lieutenant governor. Defence is the responsibility of the United Kingdom.

The island has been inhabited since before 6500 BC. Gaelic cultural influence began in the 5th century AD, and the Manx language, a branch of the Gaelic languages, emerged. In 627, Edwin of Northumbria conquered the Isle of Man along with most of Mercia. In the 9th century, Norsemen established the Kingdom of the Isles, which included the Isle of Man. Magnus III, King of Norway, was King of Mann and the Isles between 1099 and 1103.

In 1266, the island became part of Scotland under the Treaty of Perth, after being ruled by Norway. After a period of alternating rule by the kings of Scotland and England, the island came under the feudal lordship of the English Crown in 1399. The lordship revested into the British Crown in 1765, but the island never became part of the 18th-century Kingdom of Great Britain or its successors the United Kingdom of Great Britain and Ireland and the present-day United Kingdom. It retained its internal self-government.

In 1881, the Isle of Man parliament, Tynwald, became the first national legislative body in the world to give women the right to vote in a general election, although this excluded married women. In 2016, the Isle of Man was awarded biosphere reserve status by UNESCO.

Insurance and online gambling generate 17% of GNP each, followed by information and communications technology and banking with 9% each. Internationally, the Isle of Man is best known for the Isle of Man TT competition.