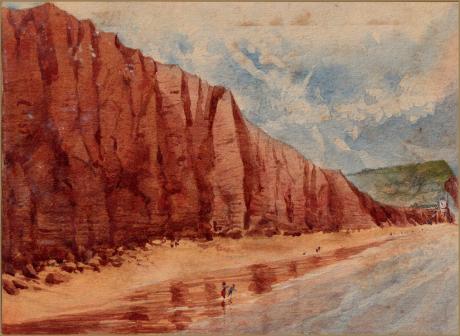 inscribed and dated on the mount " Sidmouth 1900"

pencil and watercolour
12.50 x 17 cm.
Enquire about this item

The red Permo-Triassic strata form the foundations of Sidmouth and the area around, including as far east as Seaton and to the west at Budleigh Salterton and beyond. They are continental deposits from the great landmass of Pangaea, dating from about 295-250 for the Permian, and from about 250 to 203 million years ago for the Trias. In general they represent continental, desert and semi-desert conditions. There are aeolian deposits, fluvial sediments and evaporites, including gypsum and halite. They are of typical "red-bed" facies, with some green reduced beds and reduction spots in places.

The cliffs adjacent to Sidmouth provide excellent exposures of Triassic part of the sequence of red beds. East of Sidmouth there are extensive exposures of the Mercia Mudstone (later Trias), with some Otter Sandstone (older Trias) exposed near the River Sid. To the west, the Otter Sandstone is present at Chit Rocks (Jacob's Ladder). Beyond a fault at the steps, the Mercia Mudstone is exposed in the cliffs. Further on, near Peak Hill, the gentle eastern dip brings the sandstone up at the base of the cliff. At the west of the bay the Otter Sandstone forms a series of sea stacks. Permian strata are further west in the Exmouth to Dawlish region. This is a good coast for geomorphology and sedimentary structures, but it is not an easy place for fossil collecting. Some vertebrate remains have been found east of Sidmouth. Upper Greensand and Clay-with-Flints is present at the highest cliff tops both east and west of Sidmouth.

Jacob’s Ladder itself is the tall white set of steps that have been constructed to link the Gardens to the beach below. This is not, however, the first structure in this location. An access in this area actually dates back to the mid 19th Century when steps were cut into the cliff to give access to the beach below which had been largely inaccessible until then. This developed into a cart track that was used to transport lime (brought in by boat from places such as Branscombe) to the lime kiln which has now been converted into the Tea Rooms. The ongoing cliff erosion caused the path to fall in 1870 but access to the beach had become so popular with the Victorian population by this time that an extremely long ladder was built, like Jacob’s ladder to heaven, hence its name. The steep ladder was not popular though, being difficult to use in the dress of the day, and so a new ladder was constructed in much the same style as the steps of today. The chine with the zig-zag path down to the beach was not created until the 1950’s, the esplanade walk around the base of the cliff being completed a few years later. Jacob's Ladder starts from Connaught Gardens and then zig zags down to the beach.

The gardens were named after His Grace, The Duke of Connaught, Queen Victoria’s third son. Although the Duke’s first visit to Sidmouth was not until 1931, the Royal link with Sidmouth continues back over a century earlier when the young Princess Victoria, aged only 6 months, visited with her parents and stayed in what is now the Royal Glen Hotel. It was the Duke himself who formally opened the Gardens on 3rd November 1934 at the age of 84. The plaque marking this grand opening is still clearly visible within the Gardens overlooking the main lawn.