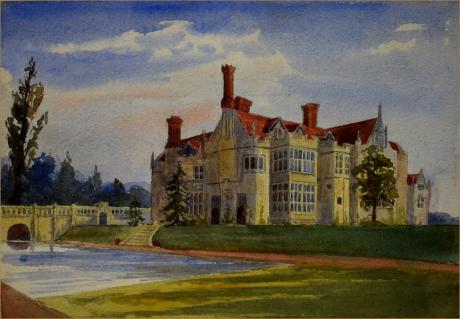 Gardens laid out by the partnership of William Henry Romaine-Walker and Augustus William Tanner in the late C19 as the opulent setting for a country house also built to their designs. The arboretum containing significant North American specimens was set out by J E Nelson in the late 1850s.

It is said that Rhinefield House was built on the site of a hunting lodge constructed for Charles II (Wilkie 1990) and certainly by the late C18 (Driver, 1789), Rhinefield was noted as a deer park. As Crown land the estate was leased by Queen Victoria to Miss Mabel Walker in 1882 for a term of ninety-nine years. Miss Walker, the heiress of a considerable fortune from the Eastwood coal mines, commissioned W H Romaine-Walker to build a new house and accompanying gardens. Rhinefield was the first of Romaine-Walker¿s garden commissions in a High Victorian style and a precursor to an Old English Garden developed by him at Great Fosters, Surrey (qv). The gardens reached their peak during the first two decades of their construction, before the onset of the First World War. There were two main design phases of 1890¿1900 and 1900¿10. After the death of her husband, Lieutenant Commander Munro, Mrs Walker-Munro continued living at Rhinefield until her death in 1934. In 1951 the House was sold by the Walker-Munro family.

The gardens declined seriously such that by the early 1980s only vestiges of the planting remained, most of the layout being marked only by a series of earthworks. Following a change of ownership and the discovery of good archival evidence for the gardens they were extensively restored between 1986 and 1990 and are now (1999) a privately run country house hotel.

LOCATION, AREA, BOUNDARIES, LANDFORM, SETTING The Rhinefield estate is set in the New Forest, 3km to the north-west of the village of Brockenhurst. It lies at the southern end of the Rhinefield Ornamental Drive, which stretches from Rhinefield Lodge northwards for 3km to the main A35, Lyndhurst to Christchurch road. The House stands on raised ground in a clearing in Clumber Inclosure, and the gardens are surrounded by the plantations and heathland of the New Forest. From the House there are views across the gardens to the south, west, and east, with long-distance views out over the heathlands of the New Forest. The eastern boundary of the site lies on the road from Brockenhurst to Rhinefield.

ENTRANCES AND APPROACHES A drive leads up to the north front of the House from Rhinefield Lodge (listed grade II) which stands at the northern tip of the site. The lodge was designed by W H Romaine-Walker and A W Tanner c 1890.

PRINCIPAL BUILDING Rhinefield House (1888-90, listed grade II*), designed by William Henry Romaine-Walker (1854¿1940) and Augustus William Tanner (1843-1923), is built in an eclectic Victorian style with `Tudor - mixed with Flamboyant and Gothic motifs - composed with panache' (Pevsner and Lloyd 1990). Rhinefield was planned to reflect the status of Miss Mabel Walker: at the time the House was built she was reputedly one of the most wealthy women in England. After her marriage to Lieutenant Commander Munro the couple undertook a honeymoon `Grand Tour' and are said to have admired many architectural styles which they incorporated into Rhinefield House, including a series of `Louis-style French interiors, a Great Hall with a hammerbeam roof, and a Smoking Room in Moorish style (from the Alhambra).

GARDENS AND PLEASURE GROUNDS To the south of the stone mansion are formal gardens of 16ha, also the work of Romaine-Walker and Tanner, which were restored between 1986 and 1990. The reconstruction of the historic gardens was made possible by the survival of an excellent series of photographic albums which, alongside aerial and archaeological surveys, provided essential evidence for the laying out and development of the gardens, as well as a series of views of the gardens at their peak.

The photographic evidence demonstrates that there were two main phases of garden development: 1890-1900 and 1900-10. The second phase resulted in changes to the initial layout before it had matured but the main axes and the division of the gardens into eight remained constant. The focus of the design is a long canal (listed grade II) which runs southwards on an axis with the window of the Great Hall. Initially it had a plain edge but was later extended with an ornate raised stone edging. At its southern end is an iron grille and pair of wrought-iron gates, through which there are views out over the forest. The gates were moved to this position from their original site at the entrance to the kitchen garden. To either side of the canal are sets of four yew-hedged parterres, the six nearest to the House including a maze. These were all restored in the late 1980s to the original designs. The easternmost pair was laid out on new lines at the same date. A statue by Simon Thomas commemorates the centenary of the gardens and the restoration project.

To the west of the formal gardens is a grass amphitheatre, put in as part of the late 1980s works. To the east of the canal and parterres is a series of three grass terraces running down to a rough lawn which extends to Rhinefield Road in the east.

The House and gardens are set in an arboretum laid out with a collection of North American conifers. This was planted in 1859 by John E Nelson, head nurseryman of the New Forest, who was also responsible for planting the Rhinefield Ornamental Drive which runs north from the lodge.

KITCHEN GARDEN A brick-walled kitchen garden (listed grade II) stands to the north-west of the House, its main entrance being a pair of wrought-iron gates in the east wall. There are also gateways in each of the other three walls. South of the kitchen garden lies the orchard and some remaining glass; to the north are the stables (listed grade II) designed, like the other buildings, by Romaine-Walker.