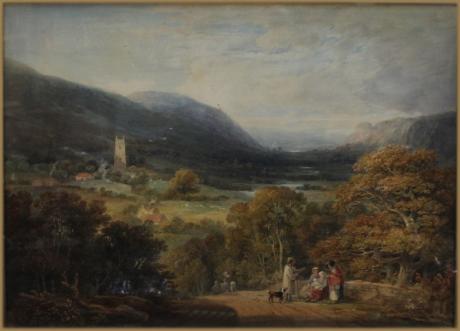 George Barret, (1767–1842), landscape painter, was born in Orchard Street, Oxford Street, London, in December 1767, the third son of George Barret (1732?–1784) RA, the landscape painter, and his wife, Frances, née Percy, about four years after his father's arrival from Dublin. His eldest brother, Joseph, is known to have assisted their father at Norbury Park, Surrey; the second brother, James, also became a painter, occasionally exhibiting at the Royal Academy between 1785 and 1819; and a sister, Mary (d. 1836), was a talented miniature and still-life painter who studied with Mrs Mee and Romney and was elected to the Society of Painters in Water Colours in 1823. In the early 1770s in an unusual moment of prosperity, the family moved to the Manor House, Westbourne Grove, to relieve the father's asthma, and perhaps the son's also. Almost certainly taught by his father, the younger George exhibited at the Royal Academy from 1800 to 1803, and perhaps from 1795, although the earlier exhibits attributed to him, including collaborations with Sawrey Gilpin RA and Philip Reinagle RA, may actually have been his late father's. He showed occasional oil paintings thereafter, but concentrated on watercolours. Although not present at the meeting at the Stratford Coffee House, Oxford Street, on 30 November 1804, at which the Society of Painters in Water Colours was founded, he was one of six additional artists who joined before the first exhibition in April 1805. For thirty-eight years he did not miss an exhibition, and between 1812 and 1820, when oil paintings were admitted in an attempt to boost sales, he served on the committee. He lived in Paddington throughout his life, from 1805 to 1809 at 29 Lisson Grove, and thereafter at 17 and 162 Devonshire Place. His career was remarkably uneventful. He travelled little, although in 1804 he was recorded as taking views of the delightful scenery in the neighbourhood of Killarney with William Sawrey Gilpin, first president of the Society of Painters in Water Colours and the son of his father's collaborator. For the most part, though, his subjects were found in the Thames valley and home counties. Quiet rural scenes were his speciality, and although the execution is very English, there is often a Dutch inspiration to them: he excelled in painting light, and all his scenes, whether sunrise, sunset, or moonlight, are remarkable for their fine rendering of atmosphere, their diffusion and gradation of light, and their poetic feeling. In the opinion of Cosmo Monkhouse (DNB) he rivalled Turner in these respects, but while always pleasing, his work has little of Turner's strength or originality. Gradually he gave up topographical landscapes in favour of Claudian romantic compositions with titles such as Retirement of the Weary Traveller. When criticizing the work of others he would say, 'I like his art' or 'I do not like his art' and he also maintained that he 'gained more by studying in the early morning, and in the evening than at any other time' (anecdote by E. Dorrell transcribed by John Jenkins, 1853, Royal Watercolour Society archives). In 1823, his sister Mary joined him both as a member of the Society of Painters in Water Colours, and in his family home at Paddington, which she shared until her death. A number of his works were engraved for the fashionable annuals of the 1820s and 1830s, and in 1840 he published The Theory and Practice of Water-Colour Painting. However, although held in high regard by his colleagues, and greatly enjoyed by many later collectors and critics, he shared the family inability to make, or at least retain, money, and left his family destitute. His last years were saddened by the death of a son. He died of inflammation of the lungs on 19 March 1842, at 162 Devonshire Place, and was buried in the graveyard of St Mary's, Paddington, by the site of the Manor House in which he had lived as a youth. His colleagues, including his old friend the watercolourist Joshua Cristall subscribed to a tombstone and supported his widow and later his daughter, Catherine. A collection of his drawings is in the Victoria and Albert Museum, London.