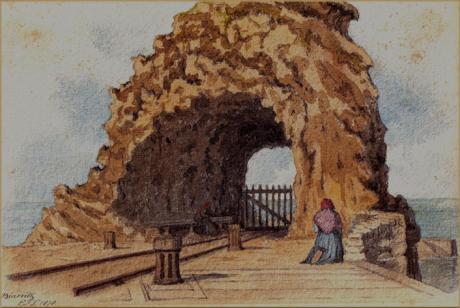 The rock of the Virgin is a natural curiosity tourist shaped long hull of the ship , dominated by a statue of the Virgin . It is an emblematic monument of the city of Biarritz in the Pyrénées-Atlantiques . From the top of this rock, you can admire the entire bay of Biarritz, its Grande Plage on one side and on the other, the Basque coast as far as the Pyrenees .

The rock is located in the town of Biarritz, between the Port-Vieux and the Port des Pêche. The two ports are separated by the Atalaye rock, the top of the promontory overlooking the sea, which served as a place for whale watching, and pierced by a 75-meter tunnel, dug on the initiative of Napoleon III in 1864 The rock is accessible by a footbridge; it is possible to cross it through a tunnel.

In the xv th century, the rock, called rock Cucurlon was a peninsula . It was the Emperor Napoleon III who had the rock pierced for the construction of a port- refuge and a dike . A 76-meter viaduct is built to connect the rock to the coast. In 1865 several crosses and a statue of the Virgin were erected there , from the Ducel et Fils de Bordeaux workshops , and purchased at the Franco-Spanish exhibition in Bayonne . The Virgin is blessed onJune 11, 1865, by the priest of Biarritz, Abbé Casaux. In 1887 a metal footbridge, wrongly attributed to the Eiffel workshops , replaced an old wooden footbridge dating from 1863.

The ashes of actress Maria Schneider (The last tango in Paris) who died onFebruary 3, 2011, at the age of 58, are dispersed in front of the rock of the Virgin in Biarritz .