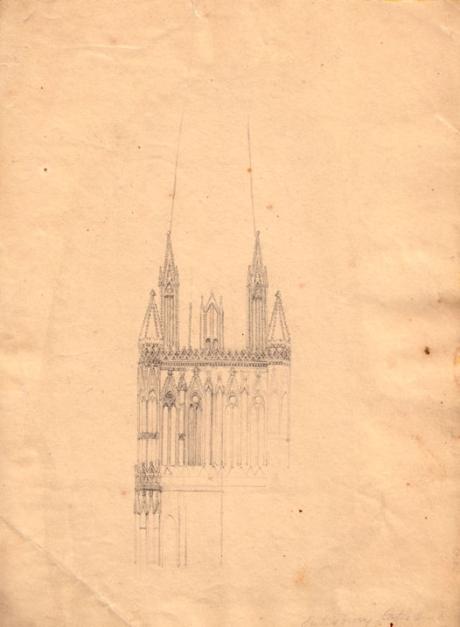 As a response to deteriorating relations between the clergy and the military at Old Sarum Cathedral, the decision was taken to resite the cathedral and the bishopric was moved to Salisbury. The move occurred during the tenure of Bishop Richard Poore, a wealthy man who donated the land on which it was built. The new cathedral was paid for by donations, principally from the canons and vicars of southeast England who were asked to contribute a fixed annual sum until it was completed.[4] A legend tells that the Bishop of Old Sarum shot an arrow in the direction he would build the cathedral but the arrow hit a deer that died in the place where Salisbury Cathedral is now. The cathedral crossing, Old Sarum and Stonehenge are reputed to be aligned on a ley line, though Clive L.N. Ruggles asserts that the site, on marshland, was chosen because a preferred site several miles to the west could not be obtained.

The foundation stone was laid on 28 April 1220. Much of the freestone for the cathedral came from Teffont Evias quarries.[7] As a result of the high water table in the new location, the cathedral was built on only four feet of foundations, and by 1258 the nave, transepts and choir were complete. The only major sections built later were the cloisters in 1240, the chapter house in 1263, tower and spire, which at 404 feet (123 m) dominated the skyline from 1320. Because most of the cathedral was built in only 38 years, it has a single consistent architectural style, Early English Gothic.

Although the spire is the cathedral's most impressive feature, it has proved to be troublesome. Together with the tower, it added 6,397 tons (6,500 tonnes) to the weight of the building. Without the addition of buttresses, bracing arches and anchor irons over the succeeding centuries, it would have suffered the fate of spires on later great ecclesiastical buildings (such as Malmesbury Abbey) and fallen down; instead, Salisbury remains the tallest church spire in the UK. The large supporting pillars at the corners of the spire are seen to bend inwards under the stress. The addition of reinforcing tie beams above the crossing, designed by Christopher Wren in 1668, arrested further deformation.[8] The beams were hidden by a false ceiling, installed below the lantern stage of the tower.

Significant changes to the cathedral were made by the architect James Wyatt in 1790, including replacement of the original rood screen and demolition of a bell tower which stood about 320 feet (100 m) north west of the main building. Salisbury is one of only three English cathedrals to lack a ring of bells, the others are Norwich Cathedral and Ely Cathedral. However it does strike the time every 15 minutes with bells. In total, 70,000 tons of stone, 3,000 tons of timber and 450 tons of lead were used in the construction of the cathedral.