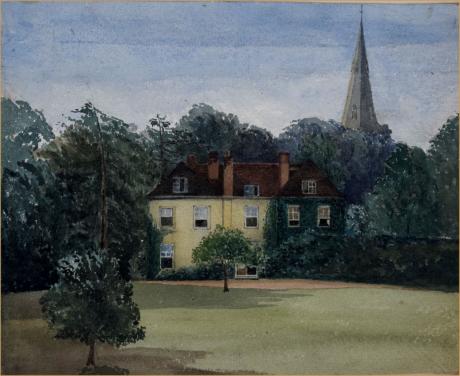 inscribed and dated in the margin " Sharbrook House, Beds, 1868"

Sharnbrook is a village and civil parish located in the Borough of Bedford in Bedfordshire, England. The settlement was recorded in the Domesday Book of 1086 as a parish within the Hundred of Willey but was probably first developed in Saxon times. The oldest surviving building, St Peter's Church, is Norman. The name is believed to be derived from the Anglo Saxon word sharn meaning dung. Many of the older buildings in the village are constructed of the local oolitic limestone, also used in other traditional north Bedfordshire settlements. Situated just north of a loop in the River Great Ouse and almost due north of Bedford, the village has developed as a ribbon-settlement running south-east to north-west, with the core of the community clustered at the north-western end.

The village has two schools, the larger of which Sharnbrook Academy has a campus on the west of the village, serves a wide area and was attended by the marathon world record holder Paula Radcliffe, who opened the Paula Radcliffe Sharnbrook Community Sports Centre named after her in April 2005. This Community Sports Centre is not only for students but also serves the wider local community of North Bedfordshire with sporting facilities. Students are aged from 11 to 18 and take both GCSE and A Level exams. The village's other school is Sharnbrook Primary which caters for young children aged from 3–11 years old who live in the immediate area.

Sharnbrook is home to Sharnbrook Women's Football Club which was established in 2002. SWFC currently play in the Beds and Herts Division 1. The club's honours include the 2006/7 Beds and Herts league and cup double and the 2015/16 Beds and Herts Division 2 league title. The team currently play on a Sunday afternoon and wear blue and red vertical striped shirts with interchangeable blue and red shorts and socks. Sharnbrook is home to many other sporting teams that both greatly predate the women's football team and significantly outstrip it in popularity.