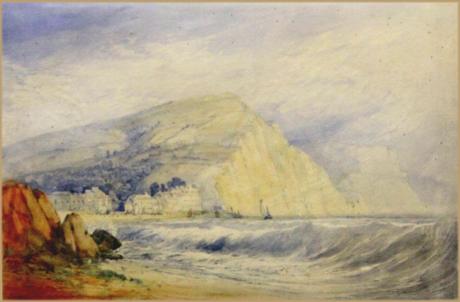 pencil and watercolour
29.50 x 44 cm.
Enquire about this item

William Callow painted a number of views in Devon and we know he visited Sidmouth in the 1850's . There is a view looking west from the town of Sidmouth near Jacob,s ladder which was Exhibited Walkers Gallery New Bond Street 1927 in a special exhibition of William Callow work.
The watercolour is dated October 1854, so it is likely that this watercolour was painted at the same time.

the Chit Rocks which are the remenants of a Cliff-Height Sea Stack destroyed in the severe 1824 storms, (a one in about 250 year event). The Jacob's Ladder promonontory might develop into a similar stack although it is currently well protected.

“Farewell, seductive Sidmouth by the sea older and more exclusive than Torquay : you’re the town for me!” so says Sir John Betjeman in "Bejtemans England".

Sidmouth is a town situated on the English Channel coast in Devon, South West England, 14 miles (23 km) east of Exeter. In 2004, it had a population of about 15,000, of whom 40% were aged 65 or over. By the time of the 2011 census the population was 12,569. It is a tourist resort and a gateway to the Jurassic Coast World Heritage Site. A large part of the town has been designated a conservation area. Sidmouth appeared in the Domesday Book as Sedemuda. Like many such settlements, it was originally a fishing village. Although attempts have been made to construct a harbour, none has succeeded. A lack of shelter in the bay prevented growth as a port.

Emmanuel Lousada, who founded the resort. The Jewish businessman recognised the physical beauty and potential of what was then a small port nestling on the mouth of the River Sid. He bought up as much land as he could in the late 1700s and set about developing a genteel, yet exotic holiday venue. He built the first cottage orné - a large house dressed up as a cottage and often thatched with pretty bargeboards, which appealed to the holidaying aristocracy of the day. Lousada was a brilliant publicist and attracted an ever- widening circle of grandees to build their own holiday houses a little above and away from the sea. They now form the best collection of cottages ornés in the country.
When the Duke and Duchess of Kent, with their baby daughter Victoria, the future Queen, took Woolbrook Cottage for their holiday, it sealed Sidmouth's status in social and architectural terms.Sidmouth remained a village until the fashion for coastal resorts grew in the Georgian and Victorian periods of the 18th and 19th centuries. The numerous fine Georgian and Regency villas and mansions are now mostly hotels. In 1819, George III's son Edward, Duke of Kent, his wife, and baby daughter (the future Queen Victoria) came to stay at Woolbrook Glen for a few weeks. In less than a month he had died from an illness. The house later became the Royal Glen Hotel; a plaque on an exterior wall records the visit. In 1874, Sidmouth was connected to the railway network by a branch line from Sidmouth Junction, which called at Ottery St Mary and Tipton St John. This was dismantled in 1967 as a result of the Beeching Axe. Most of the route can still be traced and the Sidmouth railway station can still be found now although this is now a private property.

In 2008, Canadian millionaire, Keith Owen, who had vacationed in the town and planned to retire there, bequeathed the community's civic society, the Sid Vale Association, about £2.3 million upon learning that he had only weeks to live due to lung cancer. The bequest is to be used as a capital fund to generate an annual interest dividend of around £120,000 for community projects. Sidmouth lies at the mouth of the River Sid in a valley between Peak Hill to the west and Salcombe Hill to the east. It is surrounded by the East Devon Area of Outstanding Natural Beauty and is on the Jurassic Coast, a World Heritage Site, and the South West Coast Path. The red-coloured rock indicates the arid conditions of the Triassic geological period. Erosion remains a serious concern east of the mouth of the Sid. The cliffs have been heavily eroded, threatening homes and the coastal footpath. The wide esplanade has been a prominent feature since Regency times. A series of southwesterly storms in the early 1990s washed away much of the shingle beach protecting the masonry. A series of artificial rock islands was constructed to protect the sea front, and tons of pebbles were trucked in to replace the beach.

The parish church is dedicated to St Giles & St Nicholas; it was rebuilt in 1860. Of the medieval structure only the 15th century tower was retained; the architect was William White. Oddments of Norman and later stonework were included in the rebuilding. Features of interest include the reredos by S. S. Teulon and the Duke of Kent Memorial Window which Queen Victoria gave in 1867. Parts of the original fabric such as the windows were reused by the historian Peter Orlando Hutchinson in building a folly adjoining his house. He was also responsible for saving the stained glass in the vestry. The folly is the Old Chancel in Coburg Terrace which was started by Hutchinson in 1859, in protest over the destruction of the original church fabric during rebuilding.

The church of All Saints, also Anglican (Taylor, architect, 1837), is in the Early English style with lancet windows and "oddly clumsy" pinnacles. There were also Unitarian, Wesleyan (later Methodist) and Congregational chapels; the Unitarian chapel was founded in the 17th century by Presbyterians and the Wesleyan and Congregational ones in 1837 and 1846 respectively. Sidmouth is home to the Norman Lockyer Observatory and Planetarium, located on Salcombe Hill. The facility, completed in 1912, fell into disuse but was saved from demolition by the appeals of enthusiasts to East Devon District Council. The observatory now operates as a science education project and is open to the public.

Sidmouth has featured in various literary works, e.g. as "Stymouth" in Beatrix Potter's children's story The Tale of Little Pig Robinson (1930) in which the author included views of the beach and other parts of the Devon countryside. In Thomas Hardy's Wessex it is the inspiration for "Idmouth". "Baymouth" in William Makepeace Thackeray's Pendennis, and "Spudmouth" in the The Merry Adventures of Robin Hood by Howard Pyle, are both based on the town. The poet Elizabeth Barrett lived in the town from 1832 until 1835.Sidmouth has been the setting for television shows, most recently an ITV adaptation of Agatha Christie's Marple in Summer 2005. It was a favourite spot for Sir John Betjeman. He chose it as the subject of the first programme of the television series John Betjeman in the West Country that he wrote and presented in 1962. The script takes the form of an extended poem and was republished in 2000 as a short book. Sidmouth, specifically the area of rock pools around Jacobs' Ladder, is also used as the location for H. G. Wells' The Sea Raiders.

A Gondola on the Grand Canal, Venice, by William Callow.

In 1829 Thales Fielding found him work as an engraver in Paris, where he worked alongside his friend Charles Bentley. While in the French capital he was encouraged by Thomas Shotter Boys to take up watercolours again. After exhibiting a watercolour of Richmond Hill in the Paris salon of 1831, he was offered a job teaching the family of King Louis Philippe I of France, and for several years gave lessons to the Duc de Nemours and Princess Clémentine, while his own works rapidly gained popularity in England. This was helped by his influence over Francois, prince de Joinville during the turbulence of the July Revolution. Briefly the 'Callow youth' was plunged into a platonic love affair that went unrequited with the darling Princess Clementine.

Elected a member of the Old Water-Colour Society, Callow returned to London in 1841 and began to paint larger pictures, moving away from the more "dashing" style of his earlier smaller works. He travelled extensively in France, the Netherlands, Belgium, Germany, Switzerland and Italy, had a large number of pupils, and enjoyed favour with the royal family.

He kept detailed diaries of his early travels, and just before his death, his sight having failed, he dictated an autobiography. In 1855 he moved to Great Missenden, in Buckinghamshire, where he died in 1908.