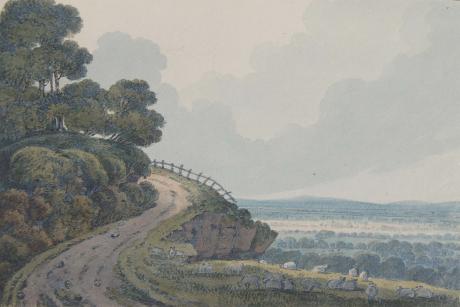 The Somerset Levels (or the Somerset Levels and Moors as they are less commonly, but more correctly, called) is a sparsely populated coastal plain and wetland area of central Somerset, England, between the Quantock and Mendip hills. The Somerset Levels consist of marine clay "levels" along the coast, and the inland (often peat based) "moors". The area borders the Severn Estuary with its very high tidal range which used to cause marine flooding, but this is now largely controlled by various sea defences. The Levels are divided into two by the Polden Hills, with the catchment areas of the River Parrett to the south, and the rivers Axe and Brue to the north. This area is separate from the North Somerset Levels, which is located inland from Weston-super-Mare.

The total area of the Levels amounts to approximately 160,000 acres (650 km2). It broadly corresponds to the administrative district of Sedgemoor but also includes the south east of Mendip district. Approximately 70% of the area is grassland and 30% is arable. Discussions are taking place concerning the possibility of obtaining World Heritage Site status for the Somerset Levels and Moors as a "cultural landscape". It has been suggested that if this bid were successful, it could improve flood control, but only if wetland fens were created again. Glastonbury Tor.The Levels and Moors are a largely flat area in which there are some slightly raised parts, called "burtles" as well as higher ridges and hills. It is an agricultural region typically with open fields of permanent grass, surrounded by ditches with willow trees. Access to the Moors and Levels is by "droves", i.e. green lanes. The Levels are a coastal sand and clay barrier about 6 metres (20 ft) above mean sea level (roughly west of the M5 motorway) whereas the inland Moors can be 6 metres (20 ft) below peak tides and have large areas of peat. The geology of the area is that of two basins mainly surrounded by hills, the runoff from which forms rivers that originally meandered across the plain but have now been controlled by embanking and clyses (the local name for a sluice). The area is prone to winter floods of fresh water and occasional salt water inundations which have occurred, the worst of which in recorded history was the Bristol Channel floods of 1607, which resulted in the drowning of an estimated 2,000 or more people, with houses and villages swept away, an estimated 200 square miles (518 km2) of farmland inundated and livestock destroyed. A further severe flood occurred in 1872-1873 when over 107 square miles (277 km2) were under water from October to March. Although underlain by much older Triassic age formations that protrude to form what would once have been islands—such as Athelney, Brent Knoll, Burrow Mump and Glastonbury Tor—the lowland landscape was formed only during the last 10,000 years, following the end of the last ice age. Glastonbury Tor is composed of Upper Lias Sand. The Poldens and the Isle of Wedmore are composed of Blue Lias and Marl, while the Mendips are largely Carboniferous Limestone. The peak of the peat formation took place in swamp conditions around 6,000 years ago, although in some areas it continued into medieval times.