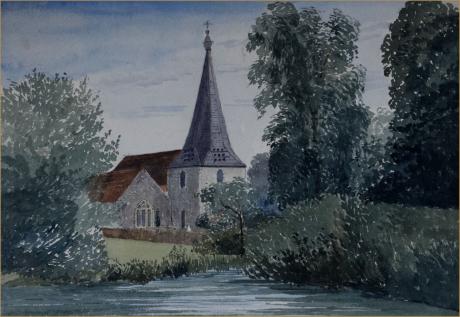 inscribed and dated in the margin " Clewer Church,, near Windsor, August 1877"

Rector William Elwell, writing in the 192Os, wrote that the nave of the present church was built around 1100, the north aisle and the tower being added at the end of the century, but we do not know how he came to this conclusion. We do know however, that the arches and pillars are Norman (though those on the north aisle were substantially restored in the 19th century) and the font has been identified as Saxon.
This means that the font stood in an earlier building which was probably a wooden one. Elwell thought that this stood on the site of the present south aisle. There are grounds for supposing that he was wrong. Until the 1850s, the font stood in a most improbable place (as a print in our museum shows) surrounded by pews at the west end of the north aisle. In ancient churches fonts are invariably by the entrance. It is possible, therefore that the original church stood on the site of the north aisle, with the font just inside its door, and that when the present church was built the font was left standing in the same position. Rector Elwell records as a fact the local tradition that William the Conquerer “was accustomed to hear Mass in Clewer Church” – and certainly there would have been no chapel in the simple wooden fortification which he built on Castle Hill. Reconstructions of William’s “castle” done in 1986 (for the 900th anniversary of Domesday Book) showed the church enclosed in the castle’s outer palisade. Clewer existed as a small settlement by the river long before Windsor came into being, with its church, mill (mentioned in Domesday Book) and fisheries. The Mill Stream provided a safe harbour with access to the Thames. The name Clewer, which appears in old documents as Clyfware and Clyvore, is said be mean “people of the cliff”, the reference being to the bluff on which Windsor Castle stands which was in the manor of Clewer. The bluff consists of chalk, and this was the building material used for Clewer Church.

In 1868 Clewer was described as a parish a mile from Windsor, but today it has been almost entirely subsumed by its neighbour. Clewer is at the northern extremity of Windsor, alongside the Thames, whose floodplain has effectively put a stop to expansion in that direction. St Andrew's is a flint church with a short W tower carrying a shingled broach spire. Otherwise it has a chancel with a S chapel, a nave with N and S aisles, the N continuing eastwards as a chapel, now used as an organ loft, and vestry, and a modern S porch. The present S aisle was the original, early 12thc. nave of the church, and its plain chancel arch now leads to the Brocas chapel; the old chancel rebuilt as a chantry by Sir Bernard Brocas in the 14thc. The present nave was added in the later 12thc., and the three-bay S arcade dates from that time. The present N arcade appears to be of the early 13thc., but there is a record of "a new N aisle with wall repairs" added by Henry Woodyer in 1861. Woodyer may thus have widened an existing aisle. The chancel was also restored by Henry Woodyer in 1868. The plain 12thc. chancel arch is round-headed, of one order with plain hollow-chamfered imposts. Romanesque sculpture is found on the S nave arcade and the font.

Clewer was held by Earl Harold before the Conquest, and by Ralph FitzSeifrid in 1086. It was assessed at 5 hides before 1066, but the Conqueror appropriated half a hide for his castle of Windsor. By c.1200 Richard de Sifrewast was the Lord of the Manor and it remained in the male line until 1441, when it was divided between three daughters. The advowson of the church remained with the manor until 1661.

Three bays, round headed. The arcade is carried on cylindrical piers with half-column responds at the E and W ends, all on double-roll bases with plain spurs. The arches are round and of one plain order with a chamfered label with sawtooth on the face on the nave side only. Capitals are of clunch, but only the W respond capital surface can be seen, the remainder having been given a coat of gloss paint. E respond capital: flat leaves on the angles, and smaller flat leaves on the faces; two on each side and five on the main face. All leaves rise from the plain roll necking and terminate in a small disc on the chamfer of the plain, hollow-chamfered impost.

W respond capital: unpainted and breaking up badly. There are keeled flat leaves at the angles and a row of small leaves on each face; seven surviving on the main face and perhaps one lost, three surviving on each side face. The pointed tips of these leaves are emphasised by a continuous row of zigzag above them at the top of the bell. Above this is a plain abacus and a hollow chamfered impost block.

At W end of S aisle, alongside the S doorway. It consists of a tub-shaped bowl with a row of zigzag below the rim and the body of the bowl divided into eight bays by round-headed arcading. Below this the diameter narrows to a short drum, at the foot of which is a heavy roll of single cable. The bowl stands on a plain chamfered drum base, and that on a modern double step. The arcading on the bowl consists of fictive piers with chamfered bases and hollow chamfered capitals, both with necking. All of this is in flat, shallow relief with no surface articulation. In the spandrels of the arches, however, are foliage forms carved in shallow but well-modelled relief. In the descriptions that follow, bay 1 is the E bay and pier 1 is to the L of this bay. Numbering is from L to R (counter-clockwise).

The bowl is in very poor condition with a major crack running from low down on the NE northwards to reach the upper rim at the S, and from this run more or less vertical cracks at the N and NW, and a diagonal one at the SW. These are only the main ones. The rim has inserted repairs at the NE and SW. On the positive side it retains at N and S the iron staples added to allow the lid to be locked in place. Unsurprisingly the bowl is lined with lead.

VCH and Pevsner disagree about the N arcade; the former attributing it to Woodyer and the latter to the 1180s. The font is one of several arcaded examples in the county, e.g. Enborne, Avington, Radley and St Agnes Spital, Windsor but none are very close to this one. Pevsner, Hewitt and VCH agree on a twelfth century date, and the complexity of the foliage forms suggests a link with some of the Reading Abbey cloister work, e.g. the font in St James, Reading.

Clewer is an ecclesiastical parish and an area of Windsor in the county of Berkshire, England. Clewer makes up three wards of the Royal Borough of Windsor and Maidenhead, namely Clewer North, Clewer South and Clewer East.

The name Clewer comes from the word Clifwara meaning "cliff-dwellers", and is named after those who lived below the hill on which Windsor Castle was built. Historically, Clewer pre-dates New Windsor and still exists as a separate ecclesiastical parish. A Saxon settlement existed there, and it is thought that the settlement of Clewer may have grown up at a place where the river Thames could be forded. A wood-and-thatch Saxon church is believed to have existed on the site of the present church. The surviving font is thought to be Saxon, and is presumed to have belonged to the earlier church. Until the 1850s this font was in an improbable position at the west end of the north aisle and it is likely that it had never been moved from its position in the earlier Saxon church.

By the time of the Norman Conquest, there was a Manor of Clewer, mentioned in the Domesday Book as Clivore and recorded as having a church and mill. It was from here that William I took the lands on which he built his fort, which became Windsor Castle. The Manor of Clewer continued to receive a rent of 12 shillings per annum from the Crown for this land until the 16th century. The present St Andrew's Church is of Norman construction[4] and it is traditionally believed that William I habitually attended mass there, as there was no chapel within the original castle. It has a 14th-century chantry chapel to the memory of the second wife of the hero of the Hundred Years' War, Sir Bernard Brocas. The family lived in the sub-manor of Clewer Brocas until rebellious activities obliged them to retreat to obscurity at Beaurepaire in Sherborne St John.

The Clewer Park area of Clewer Village is where the former home of Sir Daniel Gooch once stood. It was at Clewer that Charles Thomas Wooldridge murdered his wife Laura Ellen; the execution of Wooldridge in 1896 was immortalised in Oscar Wilde's The Ballad of Reading Gaol.
Hatch Lane is the site of the former Community of St John Baptist convent which closed in 2001, when the community moved to Oxfordshire.