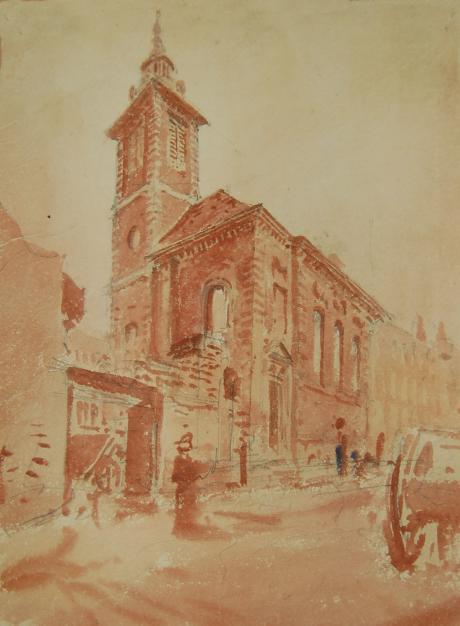 The Church of St Benet Paul's Wharf is a Welsh Anglican church in the City of London. Since 1556, it has also been the official church of the College of Arms in which many officers of arms have been buried. In 1666 it was destroyed in the Great Fire of London, after which it was rebuilt and merged with nearby St Peter's. The current church was designed by Sir Christopher Wren. It is one of only four churches in the City of London to escape damage during World War II.

St. Benet's traces its history back to the year 1111, when a church was built on the site and dedicated to St Benedict. Over time the name was abbreviated to St. Benet. To the west of the site was the watergate of Baynard's Castle, which is referenced in the biographies of Queen Anne Boleyn and Lady Jane Grey. Both the church and the castle were destroyed in the Great Fire of 1666. It was rebuilt by the architect Christopher Wren, and reopened in 1683. St Benet Paul's Wharf, London, taken from the top of nearby St Paul's Cathedral. Visible behind the church is the City of London School. On 2 March 1706, Henrietta Hobart married Charles Howard, 9th Earl of Suffolk, a captain in the 6th (Inniskilling) Dragoons there. (Henrietta Howard subsequently became mistress to the future King George II.)

The church was narrowly saved from destruction in the late 19th century, when its parish was merged with that of St Nicholas Cole Abbey. After an energetic campaign by its supporters, it was preserved and reconsecrated in 1879 as the London Church of the Church in Wales.It is now the City's Welsh church, with services conducted in Welsh. In 2008 the church was closed for a few months due to a "dwindling congregation" but reopened in time for the carol service in December that year. Welsh services are held weekly on Sundays at 11 a.m and 3.30 p.m and the church can be toured on Thursdays between 11 a.m and 3 p.m.

The church is of dark red brick, with alternate courses of Portland stone at the corners. The tower is situated to the north-west of the nave and is capped by a small lead dome, lantern and simple short spire.The interior is almost a square. Unusually for a Wren church, the ceiling is flat rather than domed or curved. The north gallery was formerly used by the Doctors' Commons, and is now used by the College of Arms. Most of the original 17th century furnishings are still intact, including the magnificent altar table, reredos and pulpit, designed by Grinling Gibbons. The lectern and baptismal font are also original. The galleries are supported by Corinthian columns. There is a memorial to Inigo Jones, who was buried in the previous church, and a medallion bust of Sir Robert Wyseman, a benefactor of St Benet's who died in 1684.

Officers of arms buried in the church