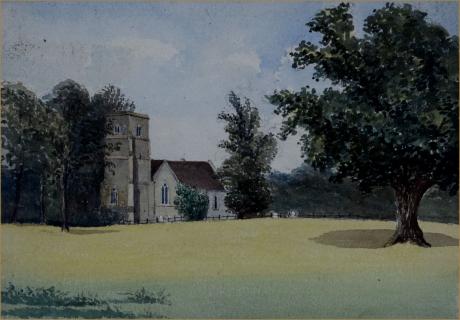 pencil and watercolour
17.5 x 25 cm
Enquire about this item

This church was constructed on or near a Saxon site, and its earliest parts are the 12th century south door, the north wall of the nave and the north door, which dates to about 1200. The chancel and large south aisle mark a period of reconstruction between about 1300 and 1340. An older tower was rebuilt in the late 15th century when the north nave windows were inserted. The church was then extensively restored between 1867 and 1898, with new roofs, south porch and north vestry.

St Ethelbert’s comprises a square W tower, chancel, nave and S aisle. The N nave wall of the Norman church survives, although restored. The chancel and S aisle date from about 1300 and the W tower is of the late 15thc. The church, including the porch sheltering the elaborately decorated Romanesque S door, underwent restoration in the 19thc. Within the building there is a Romanesque font and also a colonnette, reused as a support for the Gothic piscina in the chancel.

Larling was in the hundred of Shropham, territory of William of Warenne, at the time of DS. DS records that Hugh held land there. The jurisdiction of Larling was in the royal manor of Buckenham which was thus entitled to financial dues. Before 1066, Ulfketel held land in Larling. The dedication to St Ethelbert, an East Anglian king marytyred in 794, suggests that the church marks the site of an Anglo-Saxon settlement. A decorated 9thc. bone panel was discovered beside it in 1970.

Larling is a village and part of the civil parish of Roudham and Larling, in the English county of Norfolk. The village is 8.5 miles east north east of Thetford, 21.4 miles west south west of Norwich and 94 miles north east of London. Larling has an entry in the Domesday Book of 1085. In the great book Larling is recorded by the name ‘’Lur(i)inga’’. The main landholder is William de Warenne with the main tenant being Hugh. The survey also mentions a mill.

The still-standing medieval church was built in the 12th century, and was expanded in the 1340s creating the chancel, with a tower later being added in the 16th century. The church is built of flint, with stone used only for dressings. The tower is in the 15th-century Perpendicular style. On the north side there is a staircase turret that leads to the belfry. The windows date from the 15th century also. There is an ornamented Norman doorway, with one of the pillars carrying a mass dial. Inside the church is a four-sided font from the 12th century. The walls used to be covered in decorative paintings, one of them including a large painting of St Christopher. An organisation under the name 'Friends of Thurton Church' continue to help raise money for future restorations and the ongoing maintenance of the church.

Shrubb family is one of the longest running communal communities in England. Founded in 1970 in a 17th-century cottage near the old A11 and the Angel pub, the membership and fortunes of the community have fluctuated over the years, but the ethos of low impact living and environmental harmony have persisted.Shrubb is listed on the Diggers and Dreamers online directory and there is a video of the early days at Shrubb on YouTube titled 'Shrubb Family 1973 part 1 & 2'. Shrubb is featured in "Communes in Britain" by Andrew Rigby, 1974. As of recent years the membership of the group has fluctuated and has been left with around 6 members.