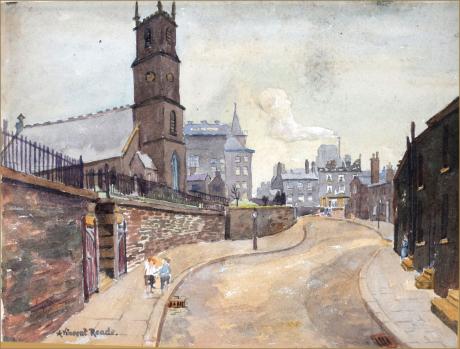 signed " A Vincent Reade."  and further inscribed signed and dated on the  on the reverse "

signed " A Vincent Reade."  and further inscribed signed and dated on the  on the reverse "St Michaels Church/ From Ashley Lane, Red Bank / Manchester / A Vincent Reade / Sep 1931."

St Michael's and All Angel's church was built in 1788 by Humphrey Owen, to seat just over a thousand people. Its foundation stone was laid on May 20, 1788 and it was consecrated on July 23, 1789. Almost twenty years later, a letter appeared in the Manchester Guardian declaring

"Why one of the ugliest churches in Manchester situated in one of the most crowded and notorious parts of the City should have so long enjoyed the pleasant sounding name 'St Michael's, Angel Meadow' is beyond understanding."The land adjacent to the church became the largest cemetery in Manchester, used for the interment of those who had no family place of burial or were too poor to afford a proper funeral.

In 1844, the Oldham Road terminus of the Manchester-Leeds Railway was abandoned and the line extended through Collyhurst to a new link station at Hunts Bank - the first Victoria Station. A railway viaduct traversed Angel Meadow, whilst the obnoxious smells from the Rivers Irk and Irwell as well as the Gould Street gas works darkened the landscape.As the area deteriorated with the proliferation of Irish Catholic immigrants inhabiting the poorest neighbourhood, and the Georgian Houses became lodging houses, church attendance fell.

Ragged Schools, such as Charter Street and Sharp Street, and other institutes for abandoned, destitute and neglected children, flourished in the area.There were improvements to the church from time to time - first "colossal saints" were thrown out, then the galleries and three decker pulpit were removed, a new roof provided.

When the Rev Jowitt Wilson was appointed rector in 1913, he arrived to find a church heavily in debt, a church door without a handle and cats and kittens in the organ! Nevertheless in his 14 years as rector he did tremendous work - he persuaded the parks committee to turn the dismal churchyard into a garden, opened the tower prayer room for daily prayer and a rectory was built. Worn out, Mr. Wilson died in 1928 after being an invalid for 9 months. Church attendance fell following slum clearances and general depopulation of the area and was finally demolished in 1935.

Author Dean kirby discovered that the bell of St. Michael's Church was removed and recast for St. Gabriel's Church in Prestwich. An inscription reads: "MADE FOR S MICHAEL'S, ANGEL MEADOW, 1848, AND RECAST FOR S GABRIEL'S, 1933" The church and much of the surrounding area of Angel Meadow became a much used muse of painter LS Lowry ,whose uncle lived on Oldham Road, featuring in several of this works.

Quote from Friedrich Engel's in his Conditions of the Working Classes in England.

"In Manchester, the pauper burial ground lies opposite the Old Town, along the Irk: this is a rough desolate place. About two years ago a railroad was carried through it. If it had been a respectable cemetery, how the bourgeoisie would have shrieked over the desecration! But it was a pauper burial ground, the resting place of the outcast and the superfluous, so no one concerned himself about the matter. It was not even thought worthwhile to convey the partially decayed bodies to the other side of the cemetery; they were heaped up just as it happened, the piles were driven into newly made graves, so that the water oozed out of the swampy ground, pregnant with putrefying matter, and filled the neighbourhood with the most revolting and injurious gases. The disgusting brutality which accompanied this work I cannot describe in further detail". The process of constructing the burial pits was described as thus:

A very large grave, or more properly, a pit for the reception of mortality, is digged, and covered up, (when not actually in use for depositing the remains of the dead) with planks, which are locked down in the night, until the hole is filled up with coffins piled beside and upon one another. The cavern of death is then closed, and covered up with earth; and another pit is prepared, and filled in the same manner. Opposite Nelson Street were the Angel Steps into the lower burial ground - so called because of the many apparitions of angels witnessed by local inhabitants, who assumed that they were there to guard the graves of the many hundreds of infants. The fascination of the burial ground, also called "The Flags" was irresistible. According to the rumor there were well over forty thousand bodies beneath the stones, all victims of poverty and sickness, whose mass grave had from time to time been plundered by fellow humans and the elements.

The population density of Angel Meadow in the mid-19th century was in excess of 350 per acre, and as social and living conditions worsened some resorted to digging up the cemetery and selling its soil as fertilizer to nearby farmers. The situation became so bad that an Act of Parliament was passed in 1855 to cover up graveyards with flagstone, hence the name, St Michael's Flags. Many reports give mention to the rats of Angel Meadow, which, attracted by the cheese cellars at Hanging Ditch nearby, would migrate in wildebeest like droves across the meadow after dark. The parochial burial ground finally closed in 1816.

The boundaries of the burial ground were enclosed by the Aspin Lane Wall in 1888 to prevent the bodies being washed down the slope. The "flags" became a renowned meeting point for the staging of fights between women as well as men, and the local Irish played a game with a bat against a board. The lower burial ground had a bandstand which held concerts twice a week and a children's playground was also installed- as depicted in LS Lowry's The Steps at Irk Place .Local Collyhurst lad and 1966 World Cup winning footballer, Nobby Stiles honed his skills on the stone flagged football pitch. Recent regeneration work in 2014 revealed bodies which are now interred in Southern Cemetery in Manchester.

Roman Manchester ran from the castrum (fort) at the Medlock crossing in Castlefield, along Deansgate to the crossing of the River Irk at the foot of Red Bank. Cheetham Hill Road starts at the River Irk crossing. The course of the Roman road has not been determined, though it is likely that there was a path that followed Red Bank up the sandstone river cliff following the gentle gradient that was preferred by draught animals. Cheetham, with its other spelling Chetham is an interesting name, the first syllable is a Celtic pre-Roman given name, while the suffix ham, meaning settlement has a Mercian or Northumbrian post-Roman name. Almost all Manchester placename are post-Roman; this implies that Cheetham was of sufficient importance in Roman times for the Celtic name to survive. .In the Middle Ages, the land was ceded to Roger de Midleton who leased it to Henry de Chetham. A descendant was Humphrey Chetham who was born at Crumpsall Hall in 1580. Crumpsall Hall, which stood at the junction of Cheetham Hill Road, Sandy Lane (Crescent Road) and Humphrey Street, was demolished in 1825. A new Crumpsall Hall was built in Crumpsall Park 300m away.

Another important estate was Stocks, at the corner of Elizabeth Street and Cheetham Hill Road. At Stocks, the main road into Manchester passed by North Street and Red Bank and over the bridge into Long Millgate. A new road called York Street cut through from here to New Bridge Street and the Miller Street-Corporation Street junction. York Street was renamed Cheetham Hill Road around the turn of the nineteenth century due to the large number of York Streets in central Manchester. York Street and its parallel streets were a planned development with elements of a gridiron structure. In the late 1830s, the very wealthy were living in villas in Crumpsall, leaving the a range of relatively cheap and spacious houses along York Street that were ideal for the traders with retail properties in town, and along Deansgate. The Jewish community had expanded into retailing-taking the skill of the hawker into fixed shops. Jacob Frank, an optician, opened a shop at 114 Deansgate, where 8 of his 11 sons became opticians: the three others moved away to open different shops in Leeds and Hull. Benjamin Hyam, who opened his Pantechnethica at 26 Market Street in April 1841 moved to Higher Broughton.[5] Successful retailers moved from garrets above their shops in town to the new inner suburbs. Joseph Braham moved onto York Street in 1841 and bought other houses which he tenanted with his co-religionists. By 1845 there were 12 Jewish retailers living along York Street or close by.[6] In 1858, two synagogues opened on York Street, the Great Synagogue and the Reformed Synagogue.

Red Bank was no bigger than one square mile but it had a huge symbolic importance in the development of the Jewish community in Greater Manchester. Red Bank was as a ‘seedbed’ of the Jewish community in terms of its population, its religious life and its social care system.
It was also a seedbed of Manchester’s economy through the enterprises of Eastern European entrepreneurs. The district was a breeding ground for working class radicalism as its residents joined and established trade unions. Red Bank’s influence reached a global stage when it featured in Friedrich Engels’s The Condition of the Working Class in England.Engels later went on to write the Communist Manifesto with Karl Marx; the foundation of European communism. From the 1890s the families that settled in Red Bank contributed largely, not only to Manchester’s Jewish history, but to the city’s economic, social and cultural life.