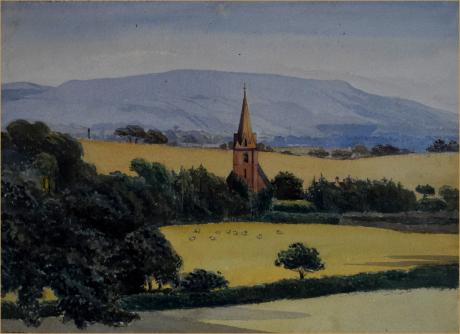 St Paul’s Church at Holme Eden, Warwick Bridge, was designed by John Dobson of Newcastle upon Tyne, a versatile architect, who was regarded as an ecclesiastical architect par excellence.The exterior of the church is virtually unchanged from Dobson’s original building. It is a very simple design in red sandstone with a slate roof, and consists of a nave, a small chancel with an apse at the east and, a spire 110 feet tall at the west end over the entrance porch, and a small vestry at the southeast corner. The building reflects John Dobson’s concern that the design should be functional, with simple layout, with no pillars or other obstructions.

The story of St Paul's Church Holme Eden, is closely bound up with the history of the Dixon family - a very familiar name around the Carlisle area. Peter Dixon Sr had been a successful merchant and ship-owner in Whitehaven, who had moved to Carlisle early in the nineteenth century some years after his marriage to Mary Ferguson.

Holme Eden Church was the brain child of Peter Dixon Jr, the second of Peter Dixon's sons, who has been described as 'decidedly the ablest and most energetic' of the sons. In 1807 he was placed in full charge of Langthwaite Mills, even though he was only eighteen years old at the time. In these early years the business flourished and a new mill was built in 1835 in Carlisle's Shaddongate, with a towering three hundred foot high chimney, known as 'Dixon's Chimney'.

However, alongside his business and political interests (he was the second Mayor of Carlisle under the Reform Act of 1832) Peter Dixon was a devout Christian. It was said of him that he 'loved to attend the services of God's House on the Sabbath Day, and after coming into residence at Holme Eden, he superintended the Sunday School on Sunday mornings and read the Scriptures to the sick and aged in their homes in the afternoons'. Shortly after moving into Holme Eden he had offered to build and endow a church for the district. It was recognised that a new Church was needed, as the existing parish church at Wetheral could 'not afford accommodation for more than one third of the inhabitants', so Dixon's offer was gladly accepted by the Diocese of Carlisle.

Peter Dixon provided the land for a Church, churchyard and burial ground, met the cost of the building itself (said to have been about £1,500) and gave £2,500 at 4 per cent per annum towards the stipend of the Vicar. The stipend of the minister was to be augmented by rents paid by the regular occupants of the pews at Church services. The level of these rents varied and one third of the pews were free. The new Church (dedicated in the name of St Paul) and the surrounding churchyard were consecrated by Hugh Percy, Bishop of Carlisle, on Tuesday, 2nd September 1845.

A recent and significant event in the history of Holme Eden Church took place in September 2013 when the Church was forced to close due to major problems with asbestos. With a desire for the church to be used for mission and outreach to our local communities, the Church Council made the decision to apply for permission from the Diocese of Carlisle to reorder the interior of the Church building. After a successful application, nine months of extensive work was undertaken with the Church interior being completely transformed. This work was completed in the Spring of 2014.

The journey to the reordering was not easy, but as a church family we saw God wonderfully provide all the finances necessary for this project. The reordering has completely transformed our work with our communities, especially with children and families, which would never have been possible otherwise.

Since the reordering, we have seen God's further provision when generous giving of monies and land by a local farming family, made it possible for a car park to be built at the church in 2014. This was then further extended in August 2017 to accommodate the growing numbers of people attending events and activities. We thank God for taking us on this journey and for all the things we have seen him do. We look forward to the future in faith and with hope at what God will do through us.