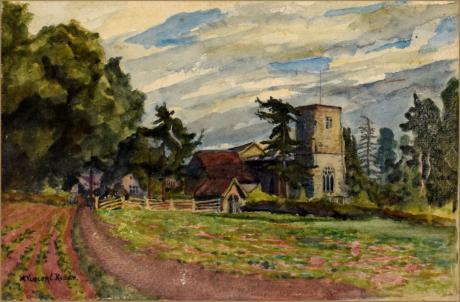 signed " A. Vincent. Reade." and further inscribed dated and signed on the reverse " St Peters Droitwitch / June 1928 / A. Vincent Reade "

Although there was a Saxon church on the site, no traces of it now remain. The current building does, however, still retain parts of the Norman building, of which the chancel arch provides a fine example of its type. The church was extended in the 12th century with a south aisle, later truncated to a south transept, which is now a Lady chapel. The south east window contains a very old example of stained glass work. The north transept was added in the 14th century. The nave was later drastically altered in the time of Henry VII, and a new roof put on, which fits through a rather odd but fine half-timbered clerestory. The tower was built in 1500AD, although the west doorway was cut later. St Peter's has a peal of six bells, and three of these are of considerable age. There is no ringing chamber, but ringers stand in the space uder the tower at the back of the church.

Perhaps the most signifcant memorial in the church, which draws visitors especially from the United States, is that to Edward Winslow, born in St Peter's parish in 1595, and one of the Pilgrim Fathers who sailed on the Mayflower. He served three times as governor of the Plymouth colony, and brought the first domestic cattle to America. The detail to the left is a from a portrait by an anonymous London artist, painted in 1651. It is the only portrait of any of the Pilgrim Fathers actually painted from life. The vestry built onto the church in 1973 was dedicated to his memory.

Droitwich Spa is a town in northern Worcestershire, England, on the River Salwarpe. It is located approximately 22 miles (35 km) south of Birmingham and 12 miles (19 km) west of Redditch.

The town was called Salinae in Roman times, then later called Wyche, derived from the Anglo-Saxon Hwicce kingdom, referred to as "Saltwich" according to Anglo-Saxon charters, with the Droit (meaning "right" in French) added when the town was given its charter on 1 August 1215 by King John. The "Spa" was added in the 19th century when John Corbett developed the town's spa facilities. The River Salwarpe running through Droitwich is likely derived from Sal meaning "salt" and weorp which means "to throw up" i.e. "the river which throws up salt" which overflows from the salt brines.

The town is situated on massive deposits of salt, and salt has been extracted there since ancient times. The natural Droitwich brine contains 2 1/2 pounds per imperial gallon (0.25 kg/l) of salt – ten times stronger than sea water and rivalled only by the Dead .During the Roman era the settlement was known as Salinae and was located at the crossroads of several Roman roads. Railway construction in 1847 revealed Roman mosaic pavements, and later excavations unearthed a Roman villa or corridor house some 44 yards (40 metres) long. Droitwich remained a fairly small town until the 1960s, when the population was still barely 7,000, but since then it has grown considerably from overspill from Birmingham with many housing estates being developed in the 1970s and '80s. In 2014, new housing consent was granted to large developments at Copcut (750 houses) and Yew Tree Hill (765 houses) with a number of other in-fill developments In July 2007, Droitwich was hit heavily by the UK-wide flooding caused by some of the heaviest rainfall in many years. The flooding was pictured in UK-wide news, having flooded the majority of the heavily subsided high street. Many shops in the high street remained closed almost a year later. The flooding crossed from the stream and canal in Vines Park, crossed Roman Way, and spilled across to the High Street some 110 yards from the source stream.

Following specialist inspections at Droitwich Spa Brine Baths on 12 December 2008, the facility was closed to allow further building investigations to take place and to avoid any potential hazard to the public or staff. Rock salt and brine was extracted by the Romans and this continued through to the Middle Ages. A salt tax was levied by the king until it was abolished in 1825. A local family named Wintour owned up to 25 salt evaporating pans in the area by the 1600s.

Brine rose naturally to the surface at three sites along the River Salwarpe within Vines Park in the centre of Droitwich. Unusually the brine was fully saturated with sodium chloride, and was extremely valuable because it was economic to boil, and the yield of salt was high. Because of its value the brine was divided into shares, one share comprising 6,912 imperial gallons (31,420 l) which produced eight long tons (8.1 t) of salt annually in the set boiling period. When it rained, particularly in the winter when brine was not being boiled, the rain water which is less dense that saltwater, settled on top of the brine and was readily removed.

Originally brine for boiling was extracted with buckets lowered into the pits which were naturally replenished. Upwich, the deepest of the three pits at 30 feet (9.1 m), supplied most of the brine, while the pit at Netherwich was only 18 feet (5.5 m) deep. The Middlewich pit, located between the two, was adversely affected by brine extraction at the other two pits and fell into disuse. Steynor in the 17th century discovered the pit and set up business for himself, but eventually due to the lack of brine he failed to compete with the town monopoly.

The underground brine reservoirs were only 200 feet (61 m) deep and in 1725 boreholes were sunk to the base of the pits, accessing brine in almost unlimited quantities and independent of the natural brine flow, and the monopoly ceased. With this production increased and pumps were used to draw brine, however, as a result parts of the town succumbed to subsidence.

In the mid-19th century, Droitwich became famous as a spa town. Unlike other places, the medicinal benefits were not derived from drinking the spa water, which is almost saturated brine, but from the muscular relief derived from swimming and floating in such a dense, concentrated salt solution, at the town's brine baths (first opened in 1830). The spa water at Droitwich is the warmest in the United Kingdom outside Bath, but it does not meet the most common definition of a hot spring as the water is below standard human body temperature.

The original Brine Baths have long since closed, but a new brine bath (part of the Droitwich Spa private hospital) opened to the public for relaxation and hydrotherapy. But this too was closed in December 2008 due to a dispute between the operator and Wychavon District Council over health and safety inspections.

The salt industry was industrialised and developed in the 19th century by John Corbett who built the nearby Chateau Impney for his Franco-Irish wife in the French 'château' style. He was responsible for the redevelopment of Droitwich as a Spa. The Droitwich Spa pyramid of schools works on a three tier system, with one high school: (Droitwich Spa High School); two middle schools (Witton Middle School and Westacre Middle School); and nine first schools (Chawson, Cutnall Green, Hindlip, Ombersley, St. Peter's, St. Joseph's (a Primary School feeding into Blessed Edward Oldcorne High School, Worcester), Tibberton, Westlands—originally Boycott Farm First School—and Wychbold First Schools). There is also the private Dodderhill School (formerly named Whitford Hall and Dodderhill), an independent school for girls from 3 to 16 years. (Some boys are present in the nursery school).

Droitwich children are also educated at schools outside the town including Worcester's Royal Grammar School and the King's School, Hawford Lodge, the Grange, Bromsgrove School with others typically travelling to Birmingham, Kidderminster, Hagley and Stourbridge by rail.