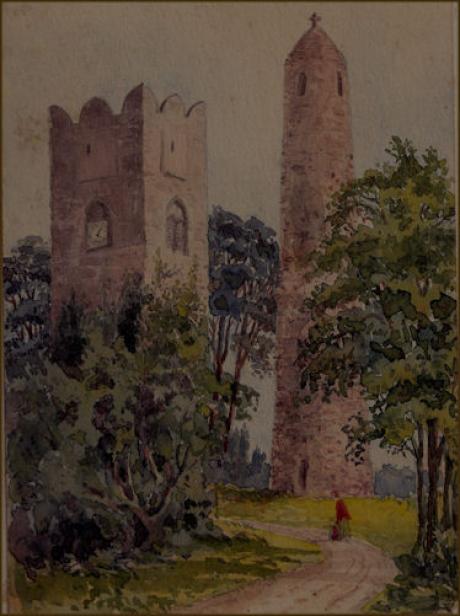 inscribed on the mount " old round Tower at Swords near Malahide"

Swords round tower stands 26 m high and is instantly recognizable from its crumbling windows and collapsed cap. It also possesses a stone cross at its apex, something that is shared with few other towers. The very low doorway is also unusual but is more likely due to the ground level being raised over time. St Columba reputedly founded a monastery here in 512 and as with many of the monasteries near Dublin had centuries of burning, pillaging, and destruction. It is also reputed that the bodies of Brian Boru and his son Murrough rested here after the Battle of Clontarf when they were on their way to Armagh for burial. The square belfry that stands beside the round tower is the only remaining relic of a medieval church built in the 14th century.

The round tower is the only remnant of a monastery founded by St Columba/St Colmcille in 512. It is believed that St Columba appointed St Finian Lobair, or the leper, as its abbot, and gave him a missal, or copy of the gospels, that he had written. During its early history the monastery possessed considerable wealth, and as a result the town of Swords rose into importance. Over the centuries the monastic settlement was severely damaged by both native Irish and Vikings raiders. The bodies of King Brian Boru, and his son Murrough, were brought here after the battle of Clontarf. The following day they were carried to the abbey of Duleek, and placed in the care of the monks of St. Cianan, on their journey to Armagh. The 10th century round tower is 26m high (to the top of the cap)and 5 metres in diameter. The walls are 1.2 m thick. It contained four floors. The entrance, which is almost level with the ground, has two modern stone steps added. In the upper storey are four large arched windows facing the four cardinal points of the compass, these windows belong to the later period when the top storey was rebuilt. The large window above the doorway may be an early treasury window. Although I enjoyed visiting the round tower I found it very difficult to photograph on my first trip. I called back earlier in the morning to catch the sunlight on the tower in the image shown left. Standing close to the round tower is a tall befry, all that remains from a medieval church.

The Swords Round Tower dates from the 9th century and marks the site of an old monastery founded by St. Colmcille in the year 560 A.D. St. Colmcille blessed the local well of clear water, thus giving the town it's name 'Sord' meaning clear or pure. The Tower is reputed to have held the remains of Brian Boru after the battle of Clontarf (1014 A.D.) before he was taken to Armagh to be buried. It is seventy-three feet high, fifty-two feet in circumference, with walls four feet thick. It contained five floors. Its present entrance which is level with the ground, is of more modern construction, as well as the roof and upper story; what appears to have been the original doorway is twenty feet from the ground, and but four feet high. The cross at the top of the tower was put there in the late 17th century to let people know that it was a Christian Tower.

All that remains of the 14th century church is the square belfry. The site of the old church was rebuilt upon by the Church of Ireland in 1811. This later church was designed by Francis Johnson in the Gothic revival style of the Chapel Royal in Dublin Castle. Church services continued into recent times until St. Columba's had to close for repairs. Services now take place at 11.30am on Sundays.
All overlook the village of Swords.

The town's origins date back to 560 AD when it was reputedly founded by Saint Colmcille (521–567). Legend has it that the saint blessed a local well, giving the settlement its name, Sord, meaning "clear" or "pure". However, An Sord also means "the water source" and could indicate a large communal drinking well that existed in antiquity. St. Colmcille's Well is located on Well Road off Main Street. Sord may also refer to a "sward", an 'expanse of grass'. The most ubiquitous landscape indicators of early Christian settlement are the ecclesiastical enclosures, and in the case of Swords, the street pattern has been influenced by the circular alignment of the settlement.

The medieval town developed in a linear pattern along Main Street, in a roughly north–south direction. The round tower, 26m in height, is also an indicator of early Christian settlement. The Irish high king Brian Boru is said to have had his funeral at the church on Spittal Hill after he was killed at the Battle of Clontarf; this was of course before the hospital and even the Church of Ireland when there would have been a small chapel there along with the round tower.

At the northern end of the street stands Swords Castle, 200m northeast of the ecclesiastical site, which was built in the early 13th century. A short distance north of the castle is the elevation known as Spittal Hill, where a hospital once stood.