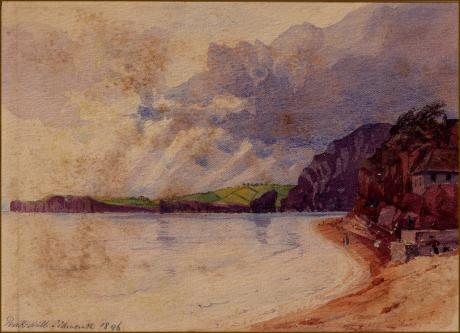 Sidmouth is a town on the English Channel in Devon, South West England, 14 miles (23 km) southeast of Exeter. With a population of 12,569 in 2011, it is a tourist resort and a gateway to the Jurassic Coast World Heritage Site. A large part of the town has been designated a conservation area.

The origins of Sidmouth pre-date recorded history. The Sid valley has been in human occupation since at least the Iron Age as attested by the presence of Sidbury Castle, and possibly earlier given the presence of Bronze Age burial mounds on Gittisham Hill] and Broad Down. The village of Sidbury itself is known to be Saxon in origin with the Church crypt dating to the 7th century. However, the Sid Valley was divided into two ecclesiastical land holdings, with Sidbury and Salcombe Regis being gifted by King Athelstan to Exeter Cathedral, and Sidmouth, which was part of the manor of Otterton, was gifted by Gytha Thorkelsdóttir (the mother of King Harold Godwinson) to the Benedictines at Mont-Saint-Michel.

Sidmouth appears in the Domesday Book of 1086 as Sedemuda, meaning "mouth of the Sid". Like many such settlements, it was originally a fishing village. By the 1200s, Sidmouth had expanded to become a market town of similar size to Sidbury and generating more income for the abbot of Mont-Saint-Michel than Otterton. By this time, Sidmouth already had a parish church, as the Otterton Cartulary refers to a grant of 30 acres of land to Guilielmas, the vicar in Sidmouth, as a glebe, and excavations in 2009 during the remodelling of the parish church revealed foundations dating from that time. It is likely that the church was already dedicated to St Giles, as the annual fair was held on his feast day 1 September.[3] According to one of the many blue plaques found around Sidmouth, not far from the church was a chapel dedicated to St Peter built sometime before 1322, the remaining wall of which is now part of Dukes Hotel.

During the 14th century, Sidmouth enjoyed a degree of prosperity from the wine trade and, as part of the manor of Otterton, was transferred by King Henry V from Mont-Saint-Michel to Syon Abbey. King Henry VIII confiscated it again during the dissolution of the monasteries and sold it off, whereafter it changed hands several times before being acquired by the Mainwaring baronets, whose family provided two of the vicars of Sidmouth parish.

Although attempts have been made to construct a harbour, none has succeeded. A lack of shelter in the bay prevented the town's growth as a port. Despite this, a part of the town is known as 'Port Royal' which is likely due to the town as having provided two ships and 67 men to King Edward III during the Hundred Years' War with which to attack Calais. The most concerted effort was a short-lived attempt in the 1830s at the west of the seafront; this included the construction of the Sidmouth Harbour Railway along the seafront and into a tunnel at the cliffs to the east that would have transported stone from Hook Ebb. Only a few traces of the railway and tunnel survive today.

According to one of the Sid Vale Association Blue Plaques, a fort was built in Sidmouth in 1628 due to fear of a French invasion or naval attacks to the fishing boad, on the part of the seafront that is known as 'Fortfield' and which is now the cricket pitch.

Another of the Blue Plaques of the Sid Vale Association, confirms that the Old Ship pub (now a Costa Coffee) had operated as a tavern in Sidmouth since the 1400's and was used by smugglers.[8] The infamous Jack Rattenbury, who was born nearby in Beer, Devon operated in the area, and was known to associate with the Mutter family of Ladram Bay (after whom Mutter's Moor on Peak Hill overlooking Sidmouth is named).

Sidmouth remained a village until the fashion for coastal resorts grew in the Georgian and Victorian periods of the 18th and 19th centuries. A number of Georgian and Regency buildings still remain.[10] In 1819, George III's son Edward, Duke of Kent, his wife, and baby daughter (the future Queen Victoria) came to stay at Woolbrook Glen for a few weeks. In less than a month he had died from an illness. The house later became the Royal Glen Hotel; a plaque on an exterior wall records the visit. Sidmouth was connected to the railway network in 1874, by a branch line from Sidmouth Junction, which from there called at Ottery St Mary and Tipton St John. This was dismantled in 1967 as a result of the Beeching Axe.

In 2008, Canadian millionaire Keith Owen, who had been on holiday in the town and planned to retire there, bequeathed about £2.3 million to the community's civic society, the Sid Vale Association, upon learning that he had only weeks to live due to lung cancer. The bequest was used as a capital fund to generate an annual interest dividend of around £120,000 for community projects.

At the 2011 census the population was 12,569, with a median age of 59.
Sidmouth lies at the mouth of the River Sid in a valley between Peak Hill to the west and Salcombe Hill to the east. It is surrounded by the East Devon Area of Outstanding Natural Beauty and is on the Jurassic Coast, a World Heritage Site and the South West Coast Path. The red-coloured rock indicates the arid conditions of the Triassic geological period.

Erosion of the cliffs to the east of the river mouth threatens homes and the coastal footpath, and is a serious concern.

The wide esplanade has been a prominent feature since Regency times. A series of southwesterly storms in the early 1990s washed away much of the shingle beach protecting the masonry. A set of artificial rock islands was constructed to protect the sea front, and tons of pebbles were trucked in to replace the beach.

Sidmouth has a number of conservation projects, notably the arboretum which in 2012 designated all land owned by Sidmouth Town Council as 'civic arboretum', the first town in the United Kingdom to do so.

Irregular bus services connect to Exeter up to every half-hour by Stagecoach South West and to Honiton or Seaton. Sidmouth is also served by AVMT Buses' service 899, which runs from Seaton to Sidmouth via Beer and Branscombe .Since the closure of the Sidmouth Railway in 1967, the nearest railway stations are Feniton, Honiton or Whimple, all on the West of England line. Feniton is the nearest of these stations, being 8 miles (13 km) away.

Sidmouth has its own town council, presided over by a chairman elected from councillors. There are eight wards, with 19 councillors in all. The town clerk is the senior paid officer, with a team of full-time and part-time staff. The town is responsible for many of the locally run services, including the information centre. Sidmouth lies within the areas of East Devon District Council and Devon County Council. The electorate of the Sidmouth ward at the 2011 census was 13,737.

The parish church is dedicated to St Giles and St Nicholas. It was rebuilt in 1860; the architect was William White. Of the medieval structure, only the 15th-century tower has been retained. Oddments of Norman and later stonework were included in the rebuilding. Features of interest include the Duke of Kent Memorial Window, which Queen Victoria gave in 1867, and the reredos by Samuel Sanders Teulon. Parts of the original fabric, such as the windows, were reused by the historian Peter Orlando Hutchinson in building a folly adjoining his house. He was also responsible for saving the stained glass in the vestry.[25][26] The folly is the Old Chancel in Coburg Terrace which was started by Hutchinson in 1859, in protest over the destruction of the original church fabric during rebuilding.

The museum, next to the church, has local memorabilia, historical artefacts, and geological samples.

The church of All Saints, also Anglican (Taylor, architect, 1837), is in the Early English style with lancet windows and "oddly clumsy" pinnacles.There were also Unitarian, Wesleyan (later Methodist) and Congregational chapels; the Unitarian chapel was founded in the 17th century by Presbyterians and the Wesleyan and Congregational ones in 1837 and 1846 respectively.

After the Reformation, the Catholic Church returned to Sidmouth in 1880 with the arrival of exiled French Jesuits who were joined in 1881 by the Sisters of the Assumption. The convent erected a purpose built chapel which opened for public mass in 1884. By the 1920s the Catholic population had grown to require a parish church. Land at Radway was acquired in 1930 and the Church of the Most Precious Blood was built, with the first Mass being celebrated on 10 November 1935.

Sidmouth is home to the Norman Lockyer Observatory and Planetarium, located on Salcombe Hill. The facility, completed in 1912, fell into disuse but was saved from demolition by the appeals of enthusiasts to East Devon District Council. The observatory now operates as a science education project and is open to the public.