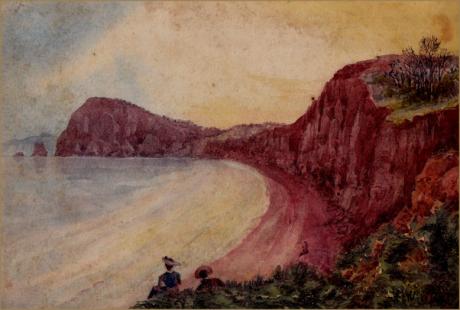 pencil and watercolour
18 x 26.5 cm.
Enquire about this item

An 18th C. lime kiln stood on cliff top at Jacob's Ladder th chalk brought by boat and carried up on donkeys. Changes in agriculture brought its decline. Later incorporated into grounds - of "Sea View". Formed foundations of pseudo-fort with clocktower, lookout, and boathouse complete with boat on davits. Jacob’s Ladder itself is the tall white set of steps that have been constructed to link the Gardens to the beach below. This is not, however, the first structure in this location. An access in this area actually dates back to the mid 19th Century when steps were cut into the cliff to give access to the beach below which had been largely inaccessible until then. This developed into a cart track that was used to transport lime (brought in by boat from places such as Branscombe) to the lime kiln which has now been converted into the Tea Rooms. The ongoing cliff erosion caused the path to fall in 1870 but access to the beach had become so popular with the Victorian population by this time that an extremely long ladder was built, like Jacob’s ladder to heaven, hence its name. The steep ladder was not popular though, being difficult to use in the dress of the day, and so a new ladder was constructed in much the same style as the steps of today. The chine with the zig-zag path down to the beach was not created until the 1950’s, the esplanade walk around the base of the cliff being completed a few years later. Jacob's Ladder starts from Connaught Gardens and then zig zags down to the beach.

The gardens were named after His Grace, The Duke of Connaught, Queen Victoria’s third son. Although the Duke’s first visit to Sidmouth was not until 1931, the Royal link with Sidmouth continues back over a century earlier when the young Princess Victoria, aged only 6 months, visited with her parents and stayed in what is now the Royal Glen Hotel. It was the Duke himself who formally opened the Gardens on 3rd November 1934 at the age of 84. The plaque marking this grand opening is still clearly visible within the Gardens overlooking the main lawn.

Peak Hill was acquired by the National Trust in 1986 due to the outstanding generosity of Miss Anne Farewell Jones, and as a result of a joint appeal by Sid Vale Association and the Trust. The cliff face of Peak Hill is part of the Jurassic Coast which stretches from Orcombe Point, near Exmouth to Old Harry Rocks near Studland- 95 miles in distance. There is a continuous sequence of Triassic, Jurassic and Cretaceous rock formations spanning approximately 185 million years of history.

The prominent pointed shape of High Peak can be seen ahead and to the right. This was the location of a prehistoric hill fort and was later occupied during the Roman period and in the Dark Ages.On the edge of the cliff there are the remains of significant earthworks, which have been variously shown as having Iron Age, Roman and Dark Age occupation. Geological study, and the lines of the earthworks suggest that the site once extended several tens of metres into what is now eroded away. General interpretation suggests that it was an Iron Age defensive site which saw re-use in the Dark Age period, perhaps as a coastal trading station.

Beyond High Peak the coastal panorama stretches over the western end of the Jurassic Coast towards the mouth of the River Exe and then beyond to Dawlish, Teignmouth and Torbay. Within the cliffs below Peak Hill and High Peak a number of very rare fossils of Triassic fish, reptiles and amphibians have been found.

Ladram Bay is a secluded bay with a pebble beach, on the south coast of Devon, England between the coastal towns of Budleigh Salterton and Sidmouth. It is about 11 miles (18 kilometres) southeast of Exeter, just under 2 mi (3 km) southwest of Sidmouth and about 2+1⁄2 miles (4 km) northeast of Budleigh Salterton.

Directly southwest of Ladram Bay are Smallstones Point and Chiselbury Bay. To the east is a hill called High Peak and below the hill are the Hern Point and Big Picket Rocks. Among the most impressive sights along the Jurassic Coast are the sea stacks at Ladram Bay. The sandstones contain many vertical fractures and joints that were formed deep in the Earth's crust during past mountain building periods. The sea picked out these planes of weakness to form caves and natural arches that have since collapsed to produce sea stacks. The “Otter Sandstone” that forms the cliffs and sea stacks were deposited in a hot dry climates in the Triassic Period, about 220 million years ago. The stacks are composed of the same rock, which is relatively soft, but they have a harder band of sandstone at their base which prevents their rapid erosion by the sea. The striking red colour of the rock is caused by iron oxide, which indicate that the layers were formed in a desert. The presence of ripple marks and channels in the sandstones, together with the remains of the long-extinct plants, insects, fish, amphibians and reptiles, show that the desert was crossed by fertile river valleys.

The Otter Sandstone Formation is the richest source of Triassic reptile remains in Britain and one of the most important in the world. At the south-west end of the bay, the most common fossils in the sandstone are networks of vertical, tube-like carbonate petrifactions (rhizocretions): these represent the roots of plants that were able to survive in the harsh dry climate of the Triassic Period.

The bay is sited on the same band of sandstone that forms the oil reservoir at the Wytch Farm oilfield on the Isle of Purbeck.