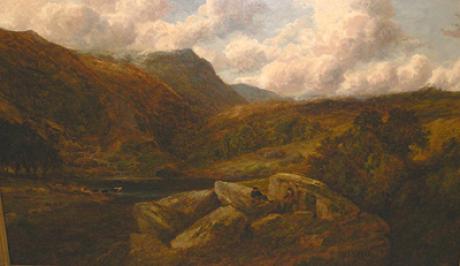 The Trossachs and Breadalbane mark the spot where the Highlands and Lowlands meet. Much of this picturesque area lies within the boundaries of Loch Lomond and The Trossachs National Park. The
Trossachs hills mark the dividing ‘Highland Line’ and, though its peaks may be humbler than those of its namesake, the Trossachs green uplands still dwarf the Lowland plain to the south.

The gateways to this startling landscape, rich in mythology and folklore, are the villages of Callander and Aberfoyle. Callander has an abundance of craft and woollen shops and the centre of the town cradles the memories and exploits of legendary Highland Rogue Rob Roy MacGregor, local hero and bandit.To the north of the town lies the less excitable, more tranquil hamlet of Balquhidder, where the
churchyard containing Rob Roy’s grave can be found, etched with the stirring epitaph “MacGregor Despite Them”. Above Aberfoyle the Queen Elizabeth Forest Park is a haven for walkers and trekkers, and the splendour of nearby Loch Katrine, the inspiration for Walter Scott’s Lady of the Lake and Rob Roy, can be enjoyed from the decks of the elegant Steam Ship Sir Walter Scott.

The Trossachs (Scottish Gaelic, Na Trosaichean) itself is a small woodland glen in the Stirling council area of Scotland. It lies between Ben An to the north and Ben Venue to the south, with Loch Katrine to the west and Loch Achray to the east. However, the name is used generally to refer to the wider area of wooded glens and braes with quiet lochs, lying to the east of Ben Lomond.

The scenic charms of this area came to popularity when Walter Scott extended his romantic portrayal of Scotland's past from border ballads to poems of a medieval past rich in chivalry and symbolism,
with his 1810 poem Lady of the Lake giving a roll call of Trossachs place names, the lady herself being found on Loch Katrine. This was followed up by his 1817 historical novel Rob Roy romanticising the
outlaw cattle thief Raibert Ruadh born by Loch Katrine and buried at nearby Balquhidder. Scotland's only lake, the Lake of Menteith, lies about 6 miles (10 km) to the south east of the glen, on the edge of
the Trossachs area.

The effect of this romantic literature was to draw tourists to the area and make the Trossachs Hotel well known. Loch Katrine itself changed in 1859 when a dam was built at the eastern end and
connecting aqueducts built to bring a new main water supply to Glasgow. Queen Victoria had a holiday house built overlooking the loch. A steamer service started, and the 1900 SS Sir Walter Scott is
still going, giving visitors a delightful way to enjoy the scenery while adding to the picturesque view. The area is now in the Loch Lomond and the Trossachs National Park, remaining popular with
walkers and cyclists, and for the motorist the winding roads have a certain charm.

Edmund John Niemann (1813–1876) was a prolific and highly successful British landscape artist working mostly in oils. Nine of his paintings are held in the Wolverhampton Art Gallery.Niemann was born in Islington, London in 1813. His father, John Diedrich Niemann, was a native of Minden, Westphalia and was a member ofLloyd's, working in the City of London. As a young man, Edmund was employed as a clerk at Lloyd's, but he decided to devote himself to art and in 1839 settled in High Wycombe, Buckinghamshire, mostly painting out of doors. Though he especially enjoyed painting the scenery of theThames and of the River Swale, near Richmond in Yorkshire, many other areas of the British Isles are covered in the corpus of his work.

Between 1844 and 1872, he exhibited paintings at a wide range of prestigious galleries including the Royal Academy, the British Institution, theSociety of British Artists in Suffolk St, the Royal Scottish Academy, the Royal Institute, the Glasgow Institute, the Paris Salon, the Liverpool Academy of Arts and the Manchester Academy of Fine Arts. The first picture exhibited was a view "On the Thames, near Great Marlow, Bucks" – a small canvas shown at the Royal Academy in 1844.

Niemann and a number of other artists, including Edward Armitage were dissatisfied with the exclusiveness showed by the management of several leading art societies. In 1848 Niemann returned to London for the foundation of the 'Free Exhibition' held in the Chinese Gallery atHyde Park Corner. This exhibition opened with 500 works of art including sculpture. In 1850 this became the Portland Gallery, Regent Street, and Niemann was chosen as one of the trustees and honorary secretary. The society later assumed the name 'The National Institution'. The existence of the society was short lived with 1861 seeing the last of their exhibitions.

His paintings are characterised by great versatility, natural colours, and visual realism, often in the romantic artistic style of J.M.W. Turner,Corot and Caspar David Friedrich. His son, Edward H. Niemann, was also a painter imitating his father's style.

Ill for a number of years in his later life, Niemann died suddenly at Brixton Hill, Surrey of apoplexy on 15 April 1876.