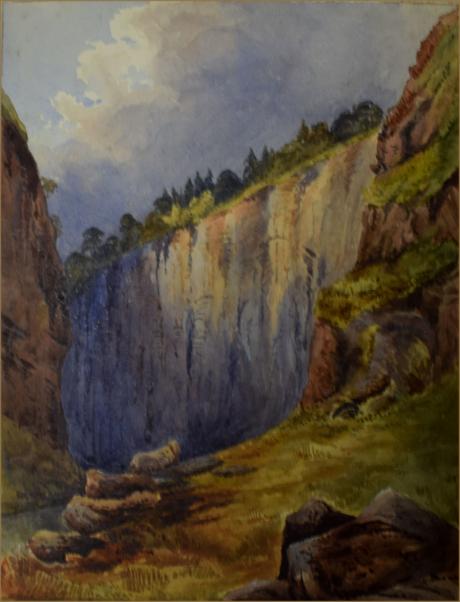 Now a dry gorge, Trow Gill was possibly once an underground cavern formed by waters which now take an alternative route through the Ingleborough Cave / Gaping Gill system. At some point in time the roof of this cavern is believed to have collapsed - Trow Gill being the suggested result (though other theories have the ravine as simply a glacial meltwater channel).Near Trow Gill is Foxholes, a neolithic rock shelter.

Ingleborough (723 m or 2,372 ft) is the second-highest mountain in the Yorkshire Dales. It is one of the Yorkshire Three Peaks (the other two being Whernside and Pen-y-ghent), and is frequently climbed as part of the Three Peaks walk. The first element of the name "Ingleborough" has been variably explained as a Scots term for 'beacon, fire', an Old Danish term meaning 'English' or a derivative of Old English ing, 'peak'.The second element is derived from the Old English word burh, meaning "a fortified place"; in this case, a hill fort. On a small relatively flat area just below the top of Ingleborough the remains of an old walled enclosure have been discovered, containing the foundations of Iron Age huts.

Ingleborough is in the south-western corner of the Yorkshire Dales, at the highest point of a triangle of land with corners at Ingleton, Ribblehead and Settle. The hill is connected to its nearest higher neighbour, Whernside, by a low col or mountain pass at Ribblehead at approximately 971 feet (296 m).

Ingleborough throws out a ridge to the north-east which develops into a summit, Simon Fell, and another summit further down, Park Fell. An ill-defined ridge going south-east from the summit breaks into two large areas of limestone plateau at about 1,300 feet (400 m); both plateaux contain summits and these are the subsidiary summits of Norber and Moughton. On the slopes of the former are the famed Norber Boulders. Continuing south-east the high land is broken by a divide carrying the minor road from Austwick to Helwith Bridge. On the other side of the divide the low summit of Smearsett Scar rises along with its subsidiaries, Pot Scar and Giggleswick Scar; from here the land falls away to the River Ribble at Settle.

On the western side of Ingleborough is a large limestone plateau appropriately known as White Scars. White Scar Caves run for 4 miles (6.5 km) below the plateau, and their entrance series has been developed as a show cave. The plateau is bounded by Raven Scar, the longest unbroken cliff in the district, and on top of it is the pothole of Meregill Hole. On the southern side (west of the Clapham path) is a similar plateau, containing potholes such as Fluted Hole and Pillar Hole.

The plateau to the north of Norber, an area known as The Allotment, is particularly rich in potholes; one of these, Long Kin East, can be followed without specialist caving equipment for 100 yards (91 m). Also here is Juniper Gulf, which descends 420 feet (130 m) underground through an arduous rift, dominated by a small geological fault. The Smearsett Scar region contains the Celtic Wall, the Ebbing and Flowing Well (which has now stopped ebbing and flowing) and a glacial hollow known as the Happy Valley.

There are several popular hillwalking routes to its summit. The most frequently used starting point is probably the village of Ingleton, about 4 miles (6 km) to the southwest. An ascent from here is about 7 1/2 miles (12 km) there and back. The route follows a walled lane, Fell Lane, before emerging onto a flat area, Crina Bottom, scattered with potholes including the considerable Quaking Pot. A steep climb through the limestone cliffs leads to the summit.

The hill may also be climbed from Horton in Ribblesdale 6 miles (10 km) to the east, following a route crossing extensive areas of limestone pavement in the region of Sulber Nick. This is the route of descent of the Three Peaks Walk and has been heavily improved by the National Trust, having changed in just thirty years from no path at all to a serious example of footpath erosion. Another route on this flank is from the isolated farmstead of Crummack.

There is also a route from Clapham that follows the Ingleborough Estate nature trail, before passing the Craven Fault, the showcave of Ingleborough Cave, the ravine of Trow Gill and the pothole of Gaping Gill. It then crosses a marshy area and climbs up to the shoulder of Little Ingleborough before following the ridge to the summit. The return to Clapham can be varied by taking the Horton-in-Ribblesdale path for 2 miles (3 km) before striking south through more limestone pavement to the small top of Norber; a descent past the famed Norber erratics (Norber Boulders) finishes a walk of 11.5 miles (18.5 km) that Wainwright considered the finest walk in the Yorkshire Dales.

An alternative route from the south-west side of the triangle starts at Newby Cote, roughly a mile northwest of Clapham on the minor road heading towards Ingleton. This path proceeds ENE until it joins the main path from Clapham about a mile from the summit.

There is a northern route from the Hill Inn at Chapel-le-Dale, the route of ascent used by the Three Peaks Walk and the shortest way up the mountain, being just 3 miles (4.8 km) from village to summit. An interesting walk across a limestone plateau with many caves, including Great Douk Cave and Meregill Hole, is followed by a steep and tedious climb to the shoulder of the subsidiary summit of Simon Fell at 2,000 feet (610 m), a mile to the north-east of the summit. The passage from here to the summit is high-level and exhilarating, but requires some scrambling.

Finally there are unwaymarked routes heading NE across Simon Fell and Souther Scales Fell both of which reach a steep descent just beyond the triangulation pillar on Park Fell to reach the Right of Way at New Close. Both routes give commanding views of the area.

The summit is a broad plateau half a mile in circumference, slightly convex, higher to the north-west than to the south-east, and carpeted with dry turf. There is an Ordnance Survey trig point (number S. 5619) at the highest point, near the western corner. Just to the north is a well-built windshelter (cross-shaped to provide shelter whichever way the wind is blowing) with a view indicator or toposcope built into its centre. Between them is a large cairn. At the point where the Ingleton path reaches the summit rim is an even larger cairn; this, remarkably, is the remains of a battlemented round tower (a hospice), built in 1830. The celebrations on the day of its opening ceremony became so alcoholic, however, that parts of it were thrown down there and then, the rest being destroyed later.

Along the northern and eastern edges of the plateau are the tumbled remains of a wall, once believed to have been a Roman military camp but now known to be an Iron Age hill fort. For the view, which is far-reaching and superb, see here. The hill fort, which covers 15 acres (61,000 m2) and of which the defensive wall can still be seen although much robbed for stone, contains the remains of several hut circles. It is now thought that this was in fact Celtic, built by the Brigantes, the largest amalgamation of tribes in Iron Age Britain. The fort was known to the Romans as the Kings Fort. It may be that this was a base for Venutius after his 'divorce' from Cartimandua, the Brigantes Queen who was a supporter of the Roman invaders, unlike Venutius who led several rebellions. What we do know is that this fort was used all year, which was unusual for such a location, but at the time of the Romans the climate was much milder, the Romans for example cultivating grapes in Newcastle.

The striking appearance of Ingleborough from all directions and from a great distance is due to the unusual geology of the underlying rock. The base of the mountain is composed of ancient Silurian and Ordovician rocks which are exposed in the valley bottoms to the north of Ingleton.[8] A belt of Carboniferous Limestone, the 'Great Scar Limestone', some 600 feet (180 m) thick, lies on top of this. Due to the limestone's permeability, all the streams flowing down from the mountain are engulfed upon reaching it, falling into a number of potholes. Above lies the layered Yoredale Series of sedimentary rocks, predominantly shale and sandstone, and generally concealed by the peat but revealed in the escarpments about 1,700 feet (520 m) up. There are also layers of harder limestone sandwiched between the softer rocks which have been eroded faster, and which protect the layers beneath them, leading to the 'tiered' effect. The whole mountain, however, is protected from erosion by a cap of Millstone Grit approximately 100 feet (30 m) tall. The rock above the Millstone Grit layer has been eroded away, which explains the comparative flatness of the summit. A good explanation of the geology and scenery of the area is given in Waltham.

Important mountain peaks visible from Ingleborough are listed here, clockwise from north, with their distance in miles and bearing in degrees. The furthest peak visible is Manod Mawr in Snowdonia, North Wales, 103 miles (166 km) away on a bearing of 218 degrees.