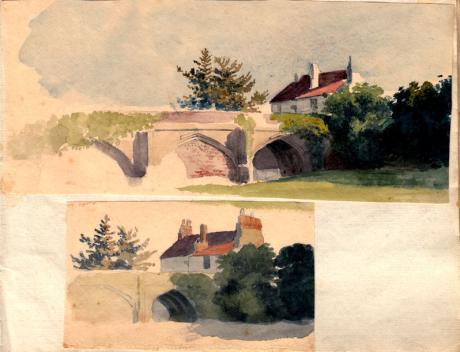 The Château d'Angers is a castle in the city of Angers in the Loire Valley, in the département of Maine-et-Loire, in France. Founded in the 9th century by the Counts of Anjou, was expanded to its current size in the 13th century. It is located overhanging the river Maine. Now open to the public, the Château d'Angers is home of the Apocalypse Tapestry. Originally, this castle was built as a fortress at one of the sites inhabited by the Romans because of its strategic defensive location.

In the 9th century, the Bishop of Angers gave the Counts of Anjou permission to build a castle in Angers.It became part of the Angevin empire of the Plantagenet Kings of England during the 12th century. In 1204, the region was conquered by Philip II and an enormous castle was built during the minority of his grandson, Louis IX ("Saint Louis") in the early part of the 13th century.[citation needed] The construction undertaken in 1234 cost 4,422 livres, roughly one per cent of the estimated royal revenue at the time. Louis gave the castle to his brother, Charles in 1246 .

In 1352, King John II le Bon, gave the castle to his second son, Louis who later became count of Anjou. Married to the daughter of the wealthy Duke of Brittany, Louis had the castle modified, and in 1373 commissioned the famous Apocalypse Tapestry from the painter Hennequin de Bruges and the Parisian tapestry-weaver Nicolas Bataille. Louis II (Louis I's son) and Yolande d'Aragon added a chapel (1405–12) and royal apartments to the complex. The chapel is a sainte chapelle, the name given to churches which enshrined a relic of the Passion. The relic at Angers was a splinter of the fragment of the True Cross which had been acquired by Louis IX. In the early 15th century, the hapless dauphin who, with the assistance of Joan of Arc would become King Charles VII, had to flee Paris and was given sanctuary at the Château d' Angers.

In 1562, Catherine de' Medici had the castle restored as a powerful fortress, but, her son, Henry III, reduced the height of the towers and had the towers and walls stripped of their embattlements; Henry III used the castle stones to build streets and develop the village of Angers. Nonetheless, under threat of attacks from the Huguenots, the king maintained the castle's defensive capabilities by making it a military outpost and by installing artillery on the château's upper terraces. At the end of the 18th century, as a military garrison, it showed its worth when its thick walls withstood a massive bombardment by cannons from the Vendean army. Unable to do anything else, the invaders simply gave up.

A military academy was established in the castle to train young officers in the strategies of war. Arthur Wellesley, 1st Duke of Wellington, best known for taking part in the defeat of Napoleon Bonaparte at the Battle of Waterloo, was trained at the Military Academy of Angers. The academy was moved to Saumur and the castle was used for the rest of the 19th century as a prison, powder magazine, and barracks.