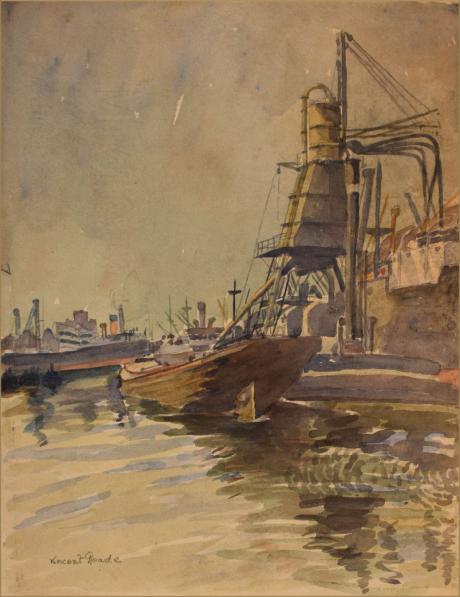 Manchester docks were a series of nine docks in Salford, Stretford and Manchester at the east end of the Manchester Ship Canal in North West England. They formed part of the Port of Manchester from 1894 until their closure in 1982. The docks marked the upper reaches of the ship canal, and were a destination for both coastal and ocean-bound vessels carrying cargo and a limited number of passengers, often travelling to and from Canada.

Manchester docks were divided into two sections; the larger Salford docks to the west of the Trafford Road swing bridge and Pomona docks to the east. Each section consisted of four docks in total, the largest being to the west; Dock 5 at Pomona was never fully completed. Of the eight working docks only one, Dock 1 at Pomona, was within Manchester itself. During much of 1948, Manchester Docks were Britain's third busiest port owing to damage suffered by the Port of Hull during the Hull Blitz.

During the 1970s the docks began a rapid decline, largely due to containerisation. The increasing size of freight-carrying ships meant they could no longer navigate the ship canal and this, combined with increased trading with Europe and the east, saw use of Manchester Docks decrease. In 1982 the remaining docks closed and the area became derelict. Recognising the need to redevelop the area, Salford City Council purchased the docks in 1984 using a derelict land grant. The Salford Quays Development Plan was adopted in May 1985, proposing complete reclamation and development of the area for commercial, residential and leisure use.

The Salford docks are the western (downstream) block, made of four large docks running ENE from the canal, numbered 9,8,7 and 6, the last three off a turning basin. They have now been redeveloped into Salford Quays.

Dock 9 is the largest of the docks and was the site of the Manchester Liners container service to Montreal, Quebec. Today the upper reaches contain cleaned water and have been cut off from their former connection to the ship canal. This cleaned water is accessed from Dock 8 via a new canal through Pier 8, while the lower section remains open to ship canal traffic. This dock was the last to be constructed, built on the former New Barnes site of Manchester Racecourse, and opened in the early years of the 20th century.
Dock 8 remains largely intact, although its entrance to the ship canal has been made considerably narrower. It is now accessed through a lock beneath a pedestrian drawbridge, which is used as a buffer to separate the cleaned water of docks 7, 8 and 9 from the relatively untreated water of the ship canal. This is the only route into the redeveloped basins of docks 9 and 7. The lock and drawbridge are mechanised and controlled from the Salford Quays Operations Tower.
Dock 7 has been cut off from the ship canal and divided into a series of small basins, linking Piers 6 and 7 by road and pedestrian footbridges. The basins provide a habitat for wildlife and the introduced fish stock. Access is again from Dock 8, at its north eastern end.
Dock 6 is retained in largely its original configuration.
The smaller basins into which the docks have been divided are all named after North American lakes, reflecting the area's strong trading links the docks had with North America.

Upstream of Dock 6 there is a triangular depression in the canal wall on a similar alignment to the other docks: this was originally a second navigable channel under a fixed road bridge. At the end of the 19th century the channel was infilled above the bridge and the remainder retained as a wharf. Later this arm was further truncated into the vestige seen today.

While Dock 9 was being built there were plans to construct a further dock (Dock 10) downstream of, and parallel to, Dock 9. Maps from 1921 still show the proposed dock, but it is omitted on later editions.

Pomona docks was a set of five docks on the Manchester Ship Canal. Unlike the former docks in what is now Salford Quays, there has been little redevelopment.

Dock 5, Ordsall Dock, was a rectangular dock on the opposite bank to the other docks, and was situated directly opposite docks 3-4. Docks 4-2 left the canal at an angle, running east from the canal, each around 200 yards (180 m) long, whilst Dock 1 (mostly in the City of Manchester) was somewhat longer at 233 yards (213 m), and ran almost parallel to the canal in a NE direction.

Dock 5 was infilled at the end of the 19th century, during the construction of Dock 9.
Dock 4 has now been entirely infilled, and almost no trace remains on the ground, although vague outlines of the dock can still be seen on aerial photographs.
Dock 3 remains intact, having been later used as the point for Pomona Lock (which connects the Manchester Ship Canal to the Bridgewater Canal, replacing the redundant Hulme Lock further upstream).
Dock 2 has been infilled along most of its length, although a short stump of the dock remains connected to the canal.
Dock 1 has been infilled, although a depression in the canal bank exists across the former dock mouth.
The official terminus of the canal is several hundred metres further up the canal, at a point where it is crossed by a footbridge. Between the four main docks and Pomona docks was a swinging road bridge. In the 1960s its openings and closings were announced by a man blowing a hunting horn.

The Pomona docks were built on the site of the Pomona Gardens, named after the Roman goddess Pomona. The swinging roadbridge separating Salford Quays from Pomona docks is now permanently closed, and only small pleasure craft can pass under it into Pomona docks. The gardens gave their name to a public house at Cornbrook. The area is served by the Pomona tram stop on the Manchester Metrolink.

A lighter is a type of flat-bottomed barge used to transfer goods and passengers to and from moored ships. Lighters were traditionally unpowered and were moved and steered using long oars called "sweeps" and the motive power of water currents. They were operated by highly skilled workers called lightermen and were a characteristic sight in London's docks until about the 1960s, when technological changes made this form of lightering largely redundant. Unpowered lighters continue to be moved by powered tugs, however, and lighters may also now themselves be powered. The term is also used in the Lighter Aboard Ship (LASH) system.

The name itself is of uncertain origin, but is believed to possibly derive from an old Dutch or German word, lichten (to lighten or unload). In Dutch, the word lichter is still used for smaller ships that take over goods from larger ships.

The lighter barge gave rise to the "lighter tug", a small, maneuverable type of harbour tug. Lighter tugs—or simply "lighters"—are designed for towing lighter barges. As such, they are smaller than traditional harbour tugs and lack the power or equipment to handle large ships.

Lighters, albeit powered ones, were proposed to be used in 2007 at Port Lincoln and Whyalla in South Australia to load Capesize ships which are too big for the shallower waters close to shore.

Hong Kong widely uses lighters in midstream operations where lighters transport cargo, mostly containers, between oceangoing vessels or to and from terminals. Lighters in Hong Kong are usually equipped with cranes of 40-60 tonnes capacity, and the largest ones can carry up to 300 TEU containers (empties). Lighters are usually not fitted with engines but are towed or pushed by tugboats. In 2007, midstream operators handled about 2 million TEUs and 5 million TEUs were transported as river trade cargo which are heavily dependent on lighters