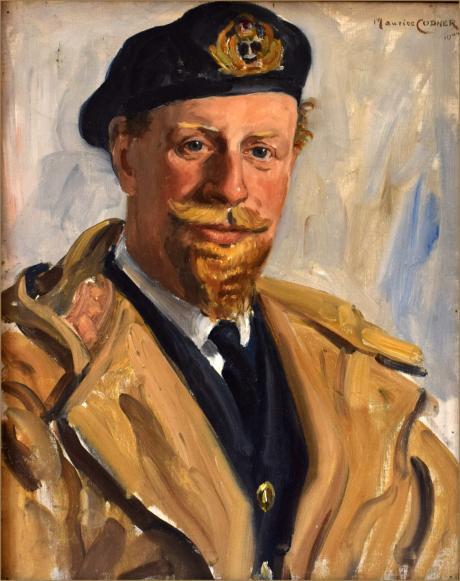 Vice Admiral Sir Charles Evans was a Royal Navy officer who became Deputy Supreme Allied Commander Atlantic. Evans initially joined the Royal Navy in 1922 aged 19 and was trained as a pilot in 1930 and was given a temporary commission as a flying officer in the Royal Air Force in 1931. he served on the Carriers Furious and Courageous flying Fairey Flycathcher Fighters. The outbreak of the War found him Lieutant in the 803 squadron on HMS Ark Royal, where he was involved in the first British Aerial victory on the 26th sept 1939 , with 3 of the Units Skuas bringing down a Do18 flying Boat. In Feb 1940 he formed the 806 Naval Air Squadron.

He served in World War II as Commanding Officer of 806 Naval Air Squadron based at HMS Sparrowhawk Orkney, carrying out bombing attacks on targets around Bergen in Norway in May 1940 and providing cover for the Dunkirk evacuation the following month.According to one source, 806 Naval Air Squadron was formed at HMS Kestrel on 1 February 1940 with Lieutenant Commander Charles Evans as the Commanding Officer and Lieutenant Desmond Vincent-Jones as the Senior Observer and using eight Blackburn Skuas and four Blackburn Rocs. However, another source gives the date and location as being 15 February at Eastleigh, possibly referring to HMS Raven and states that the squadron did not have sufficient crews to operate its aircraft until the next group from the fighter training school had been trained. In the Norwegian operations there was one particular raid on May 11 that was executed with an oil tank farm complex located on Askøy Island as the target. Lieutenant Commander Evans led six Blackburn Skuas who were each armed with a single 250 lb semi-armour-piercing bomb and four 20 lb cooper bombs. Presumably, only six Skuas took part due to the remaining two not being serviceable due to the damage sustained during the attack on 9 May. Three Blenheims armed also with incendiary bombs escorted the Skuas. The squadrons' attack was virtually unopposed with no casualties amongst either squadron and several hits were claimed upon the oil tanks and these were later confirmed to be ablaze by reconnaissance photographs.

On 12 May another attack was made upon shipping around Bergen. In this attack the target was an enemy transport ship believed to be attempting to run through to Bergen Harbour with anti-aircraft guns intended to protect the port area. As in the 11 May raid Lieutenant Commander Evans led six Skuas accompanied by three Blenheims. The squadron located the ship as it was entering the fjords around Bergen with two escorting destroyers or motor torpedo boats and split into two waves they attempted to dive bomb the target however all six 500 lb semi-armour-piercing bombs missed although no casualties were received.

806's final patrol in the operations over Dunkirk was carried out on 2 June 1940 with Charles Evans leading the patrol. During this, an enemy Ju 88 was seen to attack HMS Calcutta and was attacked by the squadron but this machine disappeared into clouds in a slow spiral, possibly destroyed. Another Ju 88 was seen and attacked but this also dived and was lost in the clouds. An Avro Anson of RAF Coastal Command later reported seeing an Ju 88 return over Dunkirk with its port engine alight shortly after the time that 806 Naval Air Squadron attacked the Ju 88.

He served on Iustrious in Bermuda. In June the squadron embarked in HMS Illustrious along with 815 and 819 Naval Air Squadrons with whom they had been temporarily based at RAF Detling for Operation Dynamo. Illustrious then left for Bermuda in order to work-up the ship's company and the embarked squadron’s crews. On one flight during this work-up a Blackburn Skua from 806 Naval Air Squadron was accidentally lost. The aircraft had been sent up with an aircraft from 815 Naval Air Squadron that was piloted by Charles Lamb in order to make dummy attacks at them to work out the best defence for Swordfish from daylight fighter attack. In its second dummy attack the Swordfish was at sea level, and the Skua pilot dived down from two or three thousand feet, misjudging both aircraft altitudes and failed to recover on his dive and plunged into the sea with no survivors.

In another flight during their time in Bermuda, all three squadrons on Illustrious were flown from the deck while it was at anchor however when the time came to land an hour later the wind had disappeared. With the crash barrier down in order to use the full length of the deck all the Swordfish managed to land safely without tearing their arrestor hooks out. When it became 806 Naval Air Squadron's turn, Lieutenant Commander Charles Evans was the first to attempt to land and with the higher speed at touch down from the Blackburn Skua the arrestor hook on his aircraft was torn out from the fuselage and he had to resort to applying right rudder and slamming the nose of his aircraft into the ships island in order to prevent it continuing down the deck and falling into the water. The second aircraft to attempt to land still retained enough speed to become airborne again after it had torn its arrestor hook out and had to wait in the air while the rest of the squadron attempted to land, and was in the end instructed to find somewhere on Bermuda to make a forced landing; he chose to land on a golf course, resulting in the aircraft's wings being sheared away by trees. All the other pilots in the squadron then either repeated the commanding officer's actions on their turn to land or continued down the deck and fell into the water, except one other aircraft, which had managed to stop before falling off the deck. Although nobody was hurt from this last incident in Bermuda all the aircraft in the squadron had been damaged and instead of heading straight to the Mediterranean from Bermuda the Illustrious had to return to the Clyde, where they re-equipped with Fulmars, and the squadron was given a few weeks to get acquainted with the new aircraft.

He continued his war service with HMS Formidable in the Mediterranean becoming Commander of Flying on that aircraft carrier in the Pacific in 1945 when the carrier operated a wing of Seafires. He was awarded a DSC in 1941 and DSO in 1941.He was in charge of Fleet Air Arm Fighter Training in the USA .

He was appointed Director of the Naval Air Divisionand Naval air Warfare in 1950. He commanded the Aircraft Carrier Ocean in Korean waters and was made a CBE in 1953 for his part in exceptional offensive effort of the Ship . He was deputy chief of Navy Personnel and head of the Directorate of Officer appointments from 1957 to 1959 and Flag Officer Aircraft Carriers from 1959 - 1960. Commander of the Royal Naval Barracks, Portsmouth in 1954 and Flag Officer Flying Training in 1956. He was NATO Deputy Supreme Allied Commander Atlantic in 1960 before retiring in 1962. He became chairman of various companies and was director general of the British Fim Producers Association from 1964 to 1967 and chairman of central casting in 1967-68. He was appointed C.G. in 1958 and a K.C.B. in 1962.

Maurice Frederick Codner, (1888–1958), portrait painter, was born in Stoke Newington, London, on 27 September 1888, the third son of William Squires Codner, iron merchant, of Abbotskerswell, Devon, and his wife, Ada Mary Payne. Codner was educated at the Stationers' Company School, but the details of his early career are not recorded. In 1913 he married Eleanor Marion, daughter of Thomas Fairfield, a captain in the mercantile marine, and during the First World War he served in France in the Royal Devon hussars. His parents owned property at Dedham, Essex, where in 1919 he was befriended by Alfred Munnings while out hunting. At some point Codner attended the Colchester School of Art, but is recorded by Munnings as working part-time as assistant curator three days a week at the Iveagh Bequest, Kenwood, London, in the late 1920s. Encouraged by Munnings, he abandoned his employment and soon became widely known for his portraits in oils of distinguished men and women. These were exhibited principally from 1929 at the Royal Society of Portrait Painters, of which he became a member in 1937, and in 1945 the honorary secretary, but also from 1928 at the Royal Academy and in many galleries in Great Britain and elsewhere. His work was always notable for its sincerity. He was singularly modest about its merits and in occasional moods of depression would regard his portraits merely as a way of making a living.

Codner had several public successes. His portrait of George VI in field marshal's uniform and Garter robes as captain-general of the Honourable Artillery Company (Armoury House, London), executed in 1951, was admired at the time and was the last portrait painted of the king. His portrait of Queen Elizabeth, the queen mother (1952), painted for the twenty-fifth birthday number of Woman's Journal, won the silver medal in 1954 at the Paris Salon, where in 1938 his portrait of Sir George Broadbridge, lord mayor of London, in his coronation robes (Guildhall, London) had received an honourable mention. Many of his portraits, however, were pre-eminently what are called good likenesses rather than a penetrating analysis of character. In this he was extremely successful and at his peak in the 1940s and early 1950s was producing ten to fifteen such routine portraits a year, his work being especially in demand for the board-rooms of businessmen and company directors. For these he was often assisted by his only son, John Whitlock Orby Squires Codner, whose own work (under the pseudonym John Whitlock) is virtually indistinguishable from his father's.

Among Codner's well-known sitters were Field Marshal Lord Alexander of Tunis (1946), Gwilym Lloyd-George (later Viscount Tenby; 1955), and the architect Sir Albert Richardson (1956; Art-Workers' Guild, London), but it was perhaps only with theatrical personalities that his portraits achieved anything like distinction. For the Theatre Royal, Drury Lane, London, he painted Sir George Robey in the role of Falstaff (1935), followed by a further version in the comedian's familiar make-up of bowler hat and red nose. Other portraits of actors and actresses included Athene Seyler, Evelyn Laye (1933), and Leslie Henson (1952). His portrait of the contralto Kathleen Ferrier (1946; National Portrait Gallery, London), with its theatrical lighting, lurid colours, and coarse brushwork, encapsulates both the best and the worst facets of his portrait style. With his occasional landscapes Codner felt that he had more freedom and in this was influenced by the example of Munnings, whose portrait of Codner, Sketching at Wiston Bridge (1935), is a striking tribute to their friendship. Open-air sketching was his great relaxation, as was the pleasure he shared with Munnings in riding and a love of horses.

In appearance Codner was extremely well groomed; tall, slim, with a neatly trimmed beard and moustache, closely cut hair, and a rather pronounced nose, he had the distinguished and rather theatrical air of the prosperous and successful artist. His studio, which adjoined his small house at 26 Temple Fortune Hill in Hampstead Garden Suburb, Middlesex, where he lived for his entire career, was a comfortable and workmanlike place, well adapted to his various sitters. This and his little garden full of roses and trees were his pride and joy. Maurice Frederick Codner died at Beaumont House, Beaumont Street, London, on 10 March 1958 and was buried at Dedham, Essex, in his much beloved Constable country.