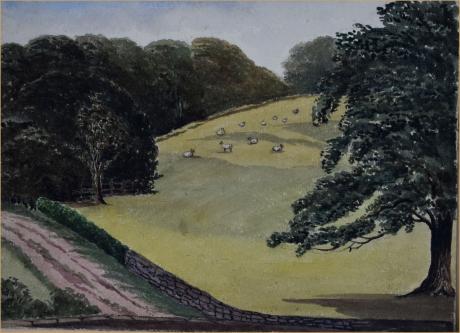 inscribed and dated in the margin "View from the Dinning Room Carham Vicarage, Northumberland,  Oct 1872,"

Carham or Carham on Tweed is a village in Northumberland, England. The village lies on the south side of the River Tweed about 3 miles (5 km) west of Coldstream. According to the United Kingdom Census 2011, it is the place in England with greatest proportion of Scottish-born people, at approximately 33%. Carham has generally been etymologised as an Old English place-name. The first syllable would be from carr 'rock', and the second either a dative plural ending (the whole name having been carrum '(at the) rocks') or the word ham ('homestead'). However, the twelfth-century chronicler Richard of Hexham appears not to have considered the name an English one, so it may actually come from Cumbric *kair 'fortification'.

Near to Carham are the extensive remains of Early British camps and a bronze sword, now in the British Museum, discovered in the nearby Tweed. Carham on the Tweed, where a stream divides Northumberland from Scotland, was the scene of two battles in Anglo-Saxon times.[4]
In 833 the Danes fought the English, and the English were routed. Leland tells us that in the 33rd year of Ecbright the Danes arrived at Lindisfarne and fought with the English at Carham where Eleven Bishops and two English Countes were slayne, and a great numbre of people.

A field between the glebe and Dunstan Wood, where bones have been from time to time disinterred, is probably the site of the battle.In 1018 the Battle of Carham between the Kingdom of Scotland and the Northumbrians resulted in a Scottish victory. The fact that the Tweed is the border between Scotland and England can be traced to the outcome of this battle. Carham is in the parliamentary constituency of Berwick-upon-Tweed.
The church is dedicated to St Cuthbert.