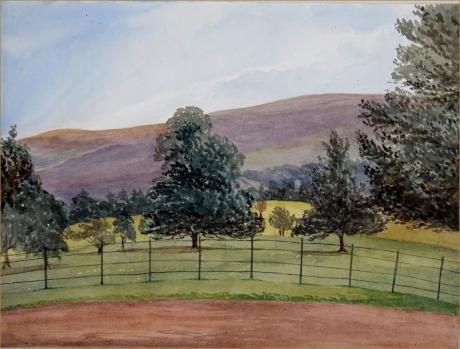 inscribed and dated in the margin " View from the Front Door, Blenkinsopp 1866"

pencil and watercolour
22.50 x 30 cm.
Enquire about this item

Blenkinsopp Castle is a fire-damaged, partly demolished 19th-century country mansion, incorporating the ruinous remains of a 14th-century tower house, which is located above the Tipalt Burn approximately one mile south of Greenhead, Northumberland, England. It is a Grade I listed building and a Scheduled Ancient Monument.

Blenkinsopp seems clearly to originate in the early medieval Cumbric language, probably as blaen 'top' + kein 'back, ridge' (thus 'top of the ridge'). To this was later added the Old English element hop 'valley'. The ancient manor of Blenkinsopp was held by the eponymous Blenkinsopp family from the 13th century, and they created a substantial tower house. A licence to crenellate the house was granted on 6 May 1340.

An early account by Wallis, writing prior to 1769 and quoted by Rev. J. F. Hodgson, found "the west and north-west side of it protected by a very high cespititious wall and a deep foss – a vault going through it, north and south, 33 [2] feet in length, and in breadth 18½ feet: two lesser ones on the north side. The facing on the western wall has been down beyond the memory of any person yet living."

A survey of 1541 reported the roof to be in decay and the tower not to be in good repair. The family, whilst retaining ownership, granted possession to the Earl of Northumberland, and abandoned the castle for their other nearby properties to the east at Bellister Castle and Blenkinsop Hall. In 1727 the heiress Jane Blenkinsopp married William Coulson of Jesmond. By 1832 the property was in disuse, and a mine agent's house was built adjoining the ruinous structure, probably by the architect John Dobson. In about 1877 William Lisle Blenkinsopp Coulson carried out a major restoration project which created a large mansion house on the site. Shortly after these works, the Coulsons sold all their Blenkinsopp estates to Edward Joicey. In the 20th century the mansion served as a hotel, but major damage was caused in 1954 by a fire, and large parts of the property were demolished on safety grounds. Today it is part home and part ruin.

Members of the ancient Blenkinsopp family are said to have first taken possession of the land on which the castle was built prior to the Norman conquest. After the invasion, when land was shared out amongst the Normans no one wanted this particular area so the sitting tenant, Blencan, was allowed to keep it. The land is thought to have once been known as 'Blencan's Hope', meaning valley. A Randolph de Blenkinsopp was recorded in the Pipe Rolls of Northumberland as owning land in the Haltwhistle area in 1240, and it is thought that he lived in a fortified manor house. The castle is thought to have been built in 1339, and historical documents show that Thomas de Blecansopp was given a licence to crenellate, or fortify, the property in 1340. One of the family's medieval patriots, Bryan de Blenkinsopp, who held the castle some 600 years ago, was said to have a lust for wealth, and married a French woman who was plain, but possessed a chest of gold so heavy it took 12 men to carry it. However, she would not tell Sir Bryan where she and her servants had hidden it, eventually causing him to quit the castle, leaving her behind. Legend has it that, tortured by her actions, she was doomed to haunt the castle, and is known as the White Lady.

Members of the Blenkinsopp family lived in the castle for several centuries, but when it began to decay in the 16th century they left for their other properties at nearby Bellister Castle, near Haltwhistle, and Dryburnhaugh, near Greenhead. By 1727 the castle was in ruins, and at around this time the Coulson family from Jesmond took ownership of the estate through marriage. A new house was built on the site in the 1830s and the castle was rebuilt between 1877 and 1880 as a mansion, before it became a hotel. The building burned down in 1954 and although it was rebuilt, some of the ruins attached to the house had to be demolished as they were unsafe.