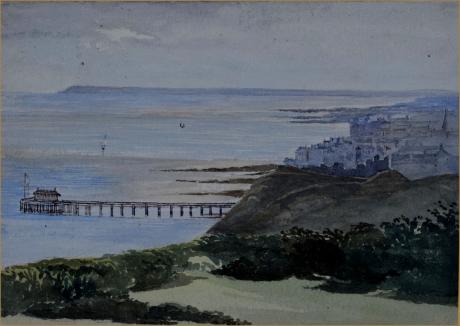 inscribed and dated in the margin "View of Hastings from the East Hill, May 1873"

Hastings is a seaside town and borough in East Sussex on the south coast of England, 24 mi (39 km) east to the county town of Lewes and 53 mi (85 km) south east of London. The town gives its name to the Battle of Hastings, which took place 8 mi (13 km) to the north-west at Senlac Hill in 1066. It later became one of the medieval Cinque Ports. In the 19th century, it was a popular seaside resort, as the railway allowed tourists and visitors to reach the town. Today, Hastings is a fishing port with a beach-based fishing fleet. It had an estimated population of 92,855 in 2018.

he first mention of Hastings is found in the late 8th century in the form Hastingas. This is derived from the Old English tribal name Hæstingas, meaning `the constituency (followers) of Hæsta'. Symeon of Durham records the victory of Offa in 771 over the Hestingorum gens, that is, "the people of the Hastings tribe." Hastingleigh in Kent was named after that tribe. The place name Hæstingaceaster is found in the Anglo-Saxon Chronicle entry for 1050, and may be an alternative name for Hastings. However, the absence of any archaeological remains of or documentary evidence for a Roman fort at Hastings suggest that Hæstingaceaster may refer to a different settlement, most likely that based on the Roman remains at Pevensey.

Evidence of prehistoric settlements have been found at the town site: flint arrowheads and Bronze Age artefacts have been found. Iron Age forts have been excavated on both the East and West Hills. This suggests that the inhabitants moved early to the safety of the valley in between the forts. The settlement was already based on the port when the Romans arrived in Britain for the first time in 55 BC. At this time, they began to exploit the iron (Wealden rocks provide a plentiful supply of the ore), and shipped it out by boat. Iron was worked locally at Beauport Park, to the north of the town. It employed up to one thousand men and is considered to have been the third-largest mine in the Roman Empire. There was also a possible iron-working site near Blacklands Church in the town - the old name of 'Ponbay Bridge' for a bridge that used to exist in the area is a corruption of 'Pond Bay' as suggested by Thomas Ross (Mayor of Hastings and author of an 1835 guide book)

With the departure of the Romans, the town suffered setbacks. The Beauport site was abandoned, and the town suffered from problems from nature and man-made attacks. The Sussex coast has always suffered from occasional violent storms; with the additional hazard of longshore drift (the eastward movement of shingle along the coast), the coastline has been frequently changing. The original Roman port is likely now under the sea. Bulverhythe was probably a harbour used by Danish invaders, which suggests that -hythe or hithe means a port or small haven.

From the 6th century AD until 771, the people of the area around modern-day Hastings, identified the territory as that of the Haestingas tribe and a kingdom separate from the surrounding kingdoms of Suth Saxe ("South Saxons", i.e. Sussex) and Kent. It worked to retain its separate cultural identity until the 11th century.The kingdom was probably a sub-kingdom, the object of a disputed overlordship by the two powerful neighbouring kingdoms: when King Wihtred of Kent settled a dispute with King Ine of Sussex & Wessex in 694, it is probable that he seceded the overlordship of Haestingas to Ine as part of the treaty.

In 771 King Offa of Mercia invaded Southern England, and over the next decade gradually seized control of Sussex and Kent. Symeon of Durham records a battle fought at an unidentified location near Hastings in 771, at which Offa defeated the Haestingas tribe, effectively ending its existence as a separate kingdom. By 790, Offa controlled Hastings effectively enough to confirm grants of land in Hastings to the Abbey of St Denis, in Paris.[13] But, the Anglo-Saxon Chronicle for 1011 relates that Vikings overran "all Kent, Sussex, Surrey and Haestingas", indicating the town was still considered a separate 'county' or province to its neighbours 240 years after Offa's conquest. During the reign of Athelstan, he established a royal mint in Hastings in AD 928.

The start of the Norman Conquest was the Battle of Hastings, fought on 14 October 1066, although the battle itself took place 8 mi (13 km) to the north at Senlac Hill, and William had landed on the coast between Hastings and Eastbourne at Pevensey. It is thought that the Norman encampment was on the town's outskirts, where there was open ground; a new town was already being built in the valley to the east. That "New Burgh" was founded in 1069 and is mentioned in the Domesday Book as such. William defeated and killed Harold Godwinson, the last Saxon King of England, and destroyed his army, thus opening England to the Norman conquest. William caused a castle to be built at Hastings probably using the earthworks of the existing Saxon castle.

Hastings was shown as a borough by the time of the Domesday Book (1086); it had also given its name to the Rape of Hastings, one of the six administrative divisions of Sussex. As a borough, Hastings had a corporation consisting of a "bailiff, jurats, and commonalty". By a Charter of Elizabeth I in 1589, the bailiff was replaced by a mayor. Muslim scholar Muhammad al-Idrisi, writing c.1153, described Hastings as "a town of large extent and many inhabitants, flourishing and handsome, having markets, workpeople and rich merchants".

By the end of the Saxon period, the port of Hastings had moved eastward near the present town centre in the Priory Stream valley, whose entrance was protected by the White Rock headland (since demolished). It was to be a short stay: Danish attacks and huge floods in 1011 and 1014 motivated the townspeople to relocate to the New Burgh.

In the Middle Ages Hastings became one of the Cinque Ports; Sandwich, Dover and New Romney being the first, Hastings and Hythe followed, all finally being joined by Rye and Winchelsea, at one point 42 towns were directly or indirectly affiliated with the group.

In the 13th century, much of the town and half of Hastings Castle was washed away in the South England flood of February 1287. During a naval campaign of 1339, and again in 1377, the town was raided and burnt by the French, and seems then to have gone into a decline. As a port, Hastings' days were finished.

Hastings had suffered over the years from the lack of a natural harbour, and there have been attempts to create a sheltered harbour. Attempts were made to build a stone harbour during the reign of Elizabeth I, but the foundations were destroyed by the sea in terrible storms. The fishing boats are still stored on and launched from the beach.

Hastings was then just a small fishing settlement, but it was soon discovered that the new taxes on luxury goods could be made profitable by smuggling; the town was ideally located for that purpose. Near the castle ruins, on the West Hill, are "St Clement's Caves", partly natural, but mainly excavated by hand by smugglers from the soft sandstone. Their trade was to come to an end with the period following the Napoleonic Wars, for the town became one of the most fashionable resorts in Britain, brought about by the so-called health-giving properties of seawater, as well as the local springs and Roman baths. Once this came about the expansion of the town took place, to the west, since there was little space left in the valley.

The double decker promenade that runs from Hastings Pier beyond Marine Court (seen in the distance), with a break at Warrior Square, was built in the 1930s by the borough engineer Sidney Little. It was at this time that the elegant Pelham Crescent and Wellington Square were built: other building followed. In the Crescent (designed by architect Joseph Kay) is the classical style church of St Mary in the Castle (its name recalling the old chapel in the castle above) now in use as an arts centre. The building of the crescent and the church necessitated further cutting away of the castle hill cliffs. Once that move away from the old town had begun, it led to the further expansion along the coast, eventually linking up with the new St Leonards.

The extensive development meant that a large transient work-force was required. Many of the people coming in to Hastings at this time, settled on some waste-ground to the west of the main town called the America Ground. This land, originally a shingle spit created by the great storm of 1287, was declared to be Crown Property after an inquiry held at Battle during 1827 and the land was cleared in preparation for the development of this area of land by Patrick Francis Robertson.

Like many coastal towns, the population of Hastings grew significantly as a result of the construction of railway links and the fashionable growth of seaside holidays during the Victorian era. In 1801, its population was a mere 3,175; by 1831, it had reached over ten thousand; by 1891, it was almost sixty thousand.

The last harbour project began in 1896, but this also failed when structural problems and rising costs exhausted all the available funds. Today a fractured seawall is all that remains of what might have become a magnificent harbour. In 1897, the foundation stone was laid on a large concrete structure, but there was insufficient money to complete the work and the "Harbour arm" remains uncompleted. It was later partially blown up to discourage possible use by German invasion forces during World War II.

Between 1903 and 1919 Fred Judge FRPS photographed many of the towns events and disasters. These included storms, the first tram, visit of the Lord Mayor of London, Hastings Marathon Race and the pier fire of 1917. Many of these images were produced as picture postcards by the British Postcard manufacturer he founded now known as Judges Postcards.

In the 1930s, the town underwent some rejuvenation. Seaside resorts were starting to go out of fashion: Hastings perhaps more than most. The town council set about a huge rebuilding project, among which the promenade was rebuilt, and an Olympic-size bathing pool was erected. The latter, regarded in its day as one of the best open-air swimming and diving complexes in Europe, later became a holiday camp before closing in 1986. It was demolished, but the area is still known by locals as "The Old Bathing Pool".