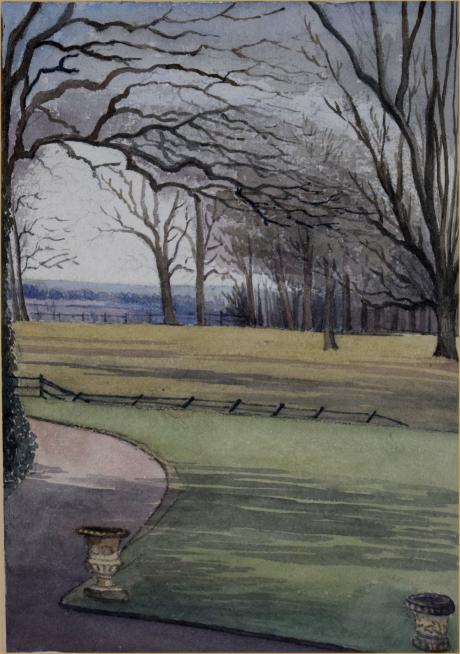 inscribed and dated in the margin "View from the Lawn, Shinfield Lodge, Berkshire March 6th 1879"

inscribed and dated in the margin "View from the Lawn, Shinfield Lodge, Berkshire March 6th 1879"

The RAF station was built on the Shinfield Lodge Estate. The site had been owned by Ebenezer Maitland in the 1700s. The village was named Shining Field, by the Anglo-Saxons, after the sparkling flood-waters which still often cover the meadows down by the Loddon on the Arborfield border. The manor was one of the many owned by Catherine of Aragon in Tudor times. She is said to have stayed there on occasion, possibly while visiting Reading Abbey. During the Civil War, King Charles is said to have stayed at Goodrest House (now part of Crosfields School). Later, the local church tower was blown to pieces by Parliamentary soldiers trying to oust a group of Royalists who were hiding out there. The fine brick replacement can still be seen today. The church is the last resting place of the parents of author Mary Russell Mitford.

Old Shinfield Manor House used to stand on the eastern side of the Shinfield Road, near Duckett's Farm, opposite the European Centre for Medium Range Weather Forecasting at old Shinfield Lodge (now Shinfield Park).

RAF Shinfield Park was located in the north of the Parish and was the home of RAF Flying Training Command from 1940 until 1968. It then became the home of the Meteorological Office College from 1971 until 2002. The European Centre for Medium-Range Weather Forecasts (ECMWF) remains on the site though the rest has been converted to residential housing.

Ebenezer Fuller Maitland FRS (23 April 1780 – 1 November 1858) was an English landowner and politician. Maitland was the only son of Ebenezer Maitland (1752-1834), a London businessman and Bank of England director, and his wife Mary, daughter of John Winter. In 1807 he changed his name to Ebenezer Fuller Maitland in accordance with the wishes of his wife's unmarried aunt, Sarah Fuller, who left him her fortune.

In 1804 Maitland served as a lieutenant-colonel in the Reading Volunteers. He was elected Member of Parliament for Lostwithiel in 1807, for Wallingford in 1812 and for Chippenham in 1826, holding the latter seat until 1830 when he unsuccessfully sought election at Abingdon. He was appointed Sheriff of Berkshire for 1825–26 and Sheriff of Breconshire for 1831–32.

Fuller Maitland was a director of the South Sea Company from 1815 until his death[1] and in 1829 was elected a Fellow of the Royal Society. As well as two large London houses, he owned country estates at Shinfield Park and Park Place in Berkshire, Stansted Mountfichet in Essex, Garth near Builth Wells in Breconshire, and High Barcaple in Kirkcudbrightshire. He died at Brighton in Sussex.

In 1800, aged 20, Maitland married Bethia (1781–1865), the only child and heiress of Joshua Ellis and his wife Esther, the only child to marry of the banker William Fuller, said to be one of the richest men in England. They had twelve children, of whom four sons and four daughters married. His eldest surviving son and heir was the art collector William Fuller Maitland, who was father of the MP and cricketer William Fuller-Maitland.