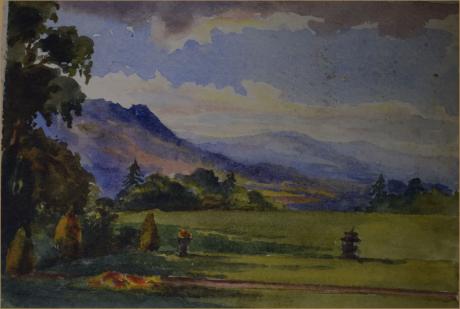 pencil and watercolour
13 x 17.50 cm.
Enquire about this item

A square gabled house of brick with mullioned and transomed windows, traditionally said to have been built c.1580-90, perhaps by Walter Hancock, for Richard Acton (d. 1590). The house is an exceptionally early example of a double pile plan, and similar to Whitehall, Shrewsbury (of 1578-82). In 1672 the house was taxed on ten hearths. The south front was originally the entrance side, and has a narrower central bay between canted bay windows. On this side the house is of two storeys plus the gables, but at the back the fall of the land means that there is an extra full storey, so the facade towers to four storeys; the basement level provided service accommodation. When Thomas Pendarves Stackhouse made the Hall his home in 1807, he found a building that had become dilapidated after many years of occupation by tenants. As his new wife Frances put it in 1812, “The small paned leaded windows with no shutters let in wind and rain so that the candles blew out unless protected by a screen. The drawing room carpet was often soaked with the rain that beat in during the night. In winter the only habitable room was the Smoking Room”. The main entrance was moved to the north front in c.1811, when Joseph Bromfield remodelled the interior and added a large new east wing, containing a new dining room. The main staircase with turned balusters is mid 18th century, and the Jacobean woodwork, including the arcaded overmantel in the hall was probably imported by Frances Stackhouse Acton in the mid 19th century. The late 16th century wainscot in the Justice Room, with miniature arcading in the frieze, may be indigenous. Most of the 19th century additions were demolished in 1961-62. The Gothick home farm (now the Acton Scott Working Farm Museum) was built in 1768 and is unusually ambitious for its date. The grounds were laid out between 1807 and 1822 in the gardenesque style, probably largely to the designs of the Stackhouse Actons themselves, and apparently replaced an open parkland setting.