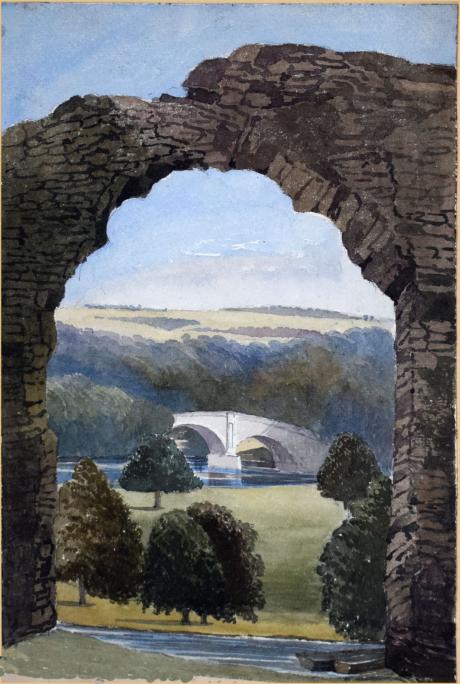 In 1795, a bridge over the River Teviot was built by William Elliot, although the design used appears to have been drawn up by another architect or builder, Alexander Stevens.Teviot Bridge has three arches, with pedestrian 'refuges' or passing places above the pillars supporting the central and largest span. Each of the bridge's piers stands on a wedge-shaped cut water designed to break the current of the river. Alexander Stevens submitted his first design for the bridge in 1784, with a budget of #1,000 which was raised to #1,230 in 1788. It appears that this offer was still being considered in 1792 when work began on the bridge. Alexander Stevens provided a first design for Teviot Bridge in 1784 with an offer to build it for £1000 In 1788 Stevens revised this offer to £1230. This offer was still under consideration in 1792 and Stevens may well have be responsible for the design although Elliot was certainly the builder.

Roxburgh Castle is a ruined royal castle that overlooks the junction of the rivers Tweed and Teviot, in the Borders region of Scotland. Its castleton developed into the royal burgh of Roxburgh, which the Scots destroyed along with the castle after capturing it in 1460. Today the ruins stand in the grounds of Floors Castle, the seat of the Duke of Roxburghe, across the river from Kelso.

Tradition states that King David I founded the castle; it is first recorded in c.1128 during his reign. In 1174 it was surrendered to England after the capture of William I at Alnwick, and was often in English hands thereafter. The Scots made many attempts to regain the fortress.[1] King Edward I of England imprisoned Mary Bruce in a cage hung outside the castle from 1306 to 1310. On 19 February 1314 it was retaken by Sir James Douglas (the "Black Douglas"), who supposedly disguised his men as cows, but was later lost again. While the Scots had control of the castle, they set about demolishing it, and in the words of the Lanercost Chronicle "all that beautiful castle the Scots pulled down to the ground, like the other castles that they had succeeded in capturing, lest the English should ever again rule the land by holding the castles."

The castle was Edward III of England's base of operations during his 1334 winter campaign against the Scots.[citation needed] A Scottish siege in 1417 necessitated repairs. The Scots again besieged Roxburgh in 1460; in the course of the action metal fragments from the explosion of one of his bombards killed King James II of Scotland. However the Scots stormed Roxburgh, capturing it, and James' queen, Mary of Guelders, had the castle demolished. In 1545, during the Nine Years' War, the English garrison commanded by Ralph Bulmer built a rectangular fort on the site at the instigation of the Earl of Hertford. This was destroyed in 1550 by the terms of the Treaty of Boulogne. The ruins of Roxburgh Castle stand in the grounds of Floors Castle, the seat of the Duke of Roxburghe. These consist of a large mound, with some small fragments of stone walls, especially on the south side.

The 1314 capture of the castle is one of the inspirations of "The Three Perils of Man" by James Hogg.