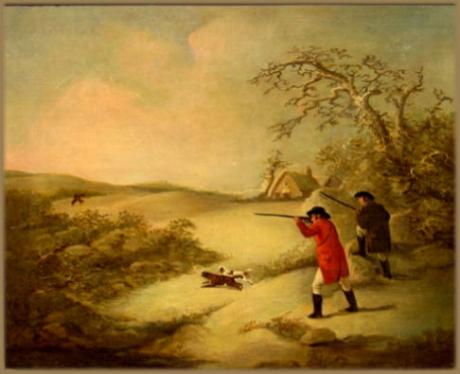 In many countries woodcock are hunted as game, and their size, speed and flight pattern makes them a very challenging shot. Anyone shooting a witnessed 'right and left'—in which two woodcock are killed with consecutive shots from a shotgun, without the gun being lowered or reloaded—can be admitted to the Shooting Times Woodcock Club.

In 1821 William Bingley described a method of trapping Eurasian woodcock formerly used in northern England: "Long parallel rows of stones or stick, four or five inches high, were made in moonlight nights on the commons frequented by them. In these rows several intervals or gateways were left in which the traps were placed. When the birds, running about in search of food, came to one of these rows, they did not usually cross it, but ran along the side till they arrived at the gateways, which they entered, and in which they were caught."

The effect of hunting on the species' European breeding population is "little understood." A study conducted in Brittany, France, explored the factors affecting the populations of wintering Eurasian woodcock. The mortality and survival rates of 98 radio-tagged birds were monitored in a hunted area and in an adjoining hunting-free reserve. The scientists found rates of survival of 0.86 for adults and 0.67 for juveniles, with the probability of survival increasing as birds spent more time in the reserve. Matrix population models were used and the conclusion was that "such low survival probabilities cannot sustain long-term viable populations. These results call for caution in the harvesting of woodcock populations wintering in western France and could be a forewarning of a decline."

In the United Kingdom, surveys are being conducted to improve knowledge of the number of breeding Eurasian woodcock and the structure of their habitat.Isotope analysis of feathers from Eurasian woodcock shot in the UK is also being performed to establish the origins of the birds.

In the United Kingdom, the early arrival of migrant woodcock in autumn was said to mean a good harvest, especially if they stayed until spring. It used to be thought that Eurasian woodcock flew to the moon during the months when they were not seen and the first full moon in November, when large numbers arrive on the British coast, is sometimes described as the 'woodcock moon'.

Reaney and Wilson wrote that the English surname "Woodcock" developed as a nickname from the bird, meaning 'a fool, simpleton or dupe'.

In William Shakespeare's play Love's Labours Lost, Berowne describes himself and his friends as 'four woodcocks in a dish', after discovering they have all fallen in love when they have sworn not to. An old folk name for the goldcrest was the "woodcock pilot" because of the mistaken belief that the warblers rode in the feathers of migrating woodcock. In Hamlet, Polonius refers to Hamlet's vows as "springes to catch woodcocks".

The 'pin feather' of the Eurasian woodcock (the covert feather of the outermost primary) can be used as a fine paintbrush for miniatures, or as a delicate tool for moving tiny objects (e.g. specks of dust). As a painting tool, the feather has been described as "far from ideal, holding very little paint, resisting water and wearing down quickly at the tip." The Eurasian woodcock has been the subject of postage stamps from several countries. A woodcock serves as a symbolic element in the novel The Birds by writer Tarjei Vesaas.

Eurasian woodcock are considered at their best for culinary purposes from October to December. After shooting, the birds are hung for 4–8 days to tenderise; the meat can be eaten as a starter, savoury, or for breakfast. A bird serves one person. They are not gutted before cooking; the head, skinned with eyes removed, is left on and the beak used to truss the bird.

A recipe for roast woodcock was featured in Mrs Beeton's Book of Household Management, but despite its name, the Victorian dish named Scotch woodcock consists of scrambled eggs on toast with anchovies.

Bingley wrote that [in the United Kingdom] "Few birds are so much in esteem for the table as these", although he also reported that woodcock meat was not eaten in Sweden or Norway as it was thought unwholesome, but that the eggs were taken and sold in "great numbers" in Stockholm and Gothenburg. In Nicolas Freeling's Kitchen Book he narrates the lavish dinner described in Kipling's Sea Constables, which features woodcock as a savoury, and explains that 'the woodcock has no gall, and is not cleaned [...] the creamy inside parts are spread on toast [...] no Edwardian gentleman would have resisted this for one minute.'

About one third of the world's Eurasian woodcock breed in Europe, with more than 90% of the continent's population breeding in Russia and Fennoscandia. Their breeding range stretches from Fennoscandia to the Mediterranean Sea and Canary Islands and from western Europe to Russia.

This species is the woodcock found through most of temperate and subarctic Eurasia. Northern and Asian populations migrate to southern Europe or the Indian Subcontinent, respectively. Birds in milder western European countries and on Atlantic islands[9] are resident. The populations breeding in north-west and southern Europe are mostly sedentary. The birds' spring migration commences in February; breeding territories are reached between March and May. Spring migration movements of woodcock are influenced by weather conditions, however this does not have a major effect on their subsequent breeding success.

The Eurasian woodcock has a large range, with an estimated Global Extent of Occurrence of 10 million square kilometres and a population of an estimated 15 million to 16 million birds. Because of its large range, stable population trend and large population size, the species has been evaluated as Least Concern. The most important threat to the population of the Eurasian woodcock in the breeding range is the increased fragmentation of its woodland habitat. At other times of year, a reduction in the amount of permanent grassland and an increase in the intensification of farming are also threats, and the species' susceptibility to avian influenza may have an impact in future.

The Eurasian woodcock's required breeding habitat is large, unfragmented areas of broadleaved deciduous or mixed broadleaved and coniferous forest, with dense undergrowth of plants such as brambles, holly, hazel, gorse, bracken or bilberry. Breeding territories must include a mix of dry, warm resting places, damp areas for feeding, and clearings for flight. In larger woods, wide 'rides' (open tracks through the wood) and small clearings are important. In winter, Eurasian woodcock also use scrubland during the day but in freezing weather they may use intertidal mud.

Shotguns were improved during the 18th and 19th centuries and game shooting became more popular. To protect the pheasants for the shooters, gamekeepers culled competitive species such as foxes, magpies and birds of prey almost to extirpation in popular areas, and landowners improved their coverts and other habitats for game. Game Laws were relaxed in 1831 which meant anyone could obtain a permit to shoot rabbits, hares, and gamebirds, although shooting and taking away any birds or animals on someone else's land without their permission continued to be the crime of poaching, as it still is.

Henry Thomas Alken (12 October 1785 – 7 April 1851) was an English painter and engraver chiefly known as a caricaturist and illustrator of sporting subjects and coaching scenes. His most prolific period of painting and drawing occurred between 1816 and 1831.

Alken was born on 12 October 1785 in Soho, Westminster, and baptised on 6 November at St James's Church, Piccadilly. He was the third son of Samuel Alken, a sporting artist. Two of his brothers were George and Samuel Alken the Younger, also an artist. In 1789, the Alken family moved from Soho to 2, Francis Street East, Bedford Square.

Young Henry first studied under his father and then with the miniature painter John Thomas Barber Beaumont (1774–1841), also known as J. T. Barber. In 1801, Alken sent a miniature portrait of Miss Gubbins to the Royal Academy Exhibition. He exhibited a second miniature at the Royal Academy before abandoning miniature painting and taking on painting and illustrating. Early in his career, he painted sporting subjects under the name of "Ben Tally-O". Alken married Maria Gordon on 14 October 1809 at St Clement's Church, Ipswich. On 22 August of the following year later the couple's first son was baptised. Alken went on to father five children, of whom two were artists, Samuel Henry, also a sporting artist, known as Henry Alken junior, and Sefferien junior.

From about 1816 onwards Alken "produced an unending stream of paintings, drawings and engravings of every type of field and other sporting activity," and his soft-ground etchings were often colored by hand. When Alken was 26, he and his young family lived over a shop in Haymarket that belonged to print publisher Thomas McLean of the "Repository of Wit and Humour." McLean paid Alken a daily wage of thirty shillings, considered a good income at the time.

Alken died in April 1851 and was buried in Highgate cemetery. Although fairly affluent for most of his career, he fell on hard times towards the end of his life and was buried at his daughter's expense.

Alken worked in both oil and watercolor and was a skilled etcher. His earliest productions were published anonymously under the signature of "Ben Tallyho", but in 1816 he issued The Beauties & Defects in the Figure of the Horse comparatively delineated under his own name. From this date until about 1831, he produced many sets of etchings of sporting subjects mostly coloured and sometimes humorous in character, the principal of which were: Humorous Specimens of Riding 1821, Symptoms of being amazed 1822, Symptoms of being amused 1822, Flowers from Nature 1823, A Touch at the Fine Arts 1824, and Ideas 1830. Besides these he published a series of books: Illustrations for Landscape Scenery and Scraps from the Sketch Book of Henry Alken in 1823, New Sketch Book in 1824, Sporting Scrap Book and Shakespeare's Seven Ages in 1827, Sporting Sketches and in 1831 Illustrations to Popular Songs and Illustrations of Don Quixote, the latter engraved by John Christian Zeitter.

Alken provided the plates picturing hunting, coaching, racing and steeplechasing for The National Sports of Great Britain (London, 1821). Alken, known as an avid sportsman, is best remembered for his hunting prints, many of which he engraved himself until the late 1830s. (Charles Lane British Racing Prints pp. 75–76). He created prints for the leading sporting printsellers such as S. and J. Fuller, Thomas McLean, and Rudolph Ackermann, and often collaborated with his friend the sporting journalist Charles James Apperley (1779–1843), also known as Nimrod. Nimrod's Life of a Sportsman, with 32 etchings by Alken, was published by Ackermann in 1842. In many of his etchings, Alken explored the comic side of riding and satirized the foibles of aristocrats, much in the tradition of other early 19th century omthe oldest of the great foxhound packs in Leicestershire. A collection of his illustrations can be seen in the print department of the British Museum.