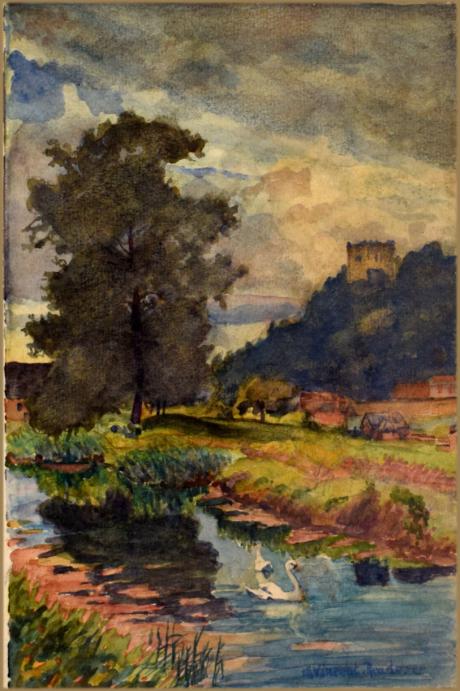 Dodderhill is a village and civil parish, near Droitwich, Worcestershire, England, located on the River Salwarpe. The parish is bisected by the M5 motorway, constructed in 1962. It is home to the Droitwich transmitting station in Wychbold. One of the earliest mentions of Dodderhill is of the Saxon Royal Palace recorded in the Saxon Charter of AD 692. There was once a Roman fort and later an Anglo-Saxon church. The parish church of St. Augustine's, is on the hill overlooking Droitwich Spa. It was completed in 1220 and rebuilt in the 18th century. A possible ley tunnel is said by archeologists to lead from St Augustine’s, to Friar Street Droitwich Spa, part of a system of tunnels linking St Augustine’s and St Andrew’s churches. (This 'tunnel' seems unlikely as it does not appear to have been located or mentioned when the railway and/or canal was built unless built after this time.

Notable people associated with Dodderhill include the MP Thomas Vernon, part of whose family estate was located in the parish; the royalist Sir Thomas Nott, who bought the manors of Sagebury and Obden in Dodderhill in 1637; and the 'Salt King' and philanthropist John Corbett who built the Chateau Impney in 1873.

Dodderhill is the oldest site of any of the Droitwich Churches. There was a Roman fort on this hill, and although we don't know when the first church was built here, there was an Anglo-Saxon church on this site, almost certainly originally a wooden one, followed by a stone building. It was significant enough for St Wulfstan to acquire the living of St Augustine's for the priory of Worcester. Work started on the Norman Church around 1180 AD and the building was completed around 1220AD. The crossing and north transept are the only parts of the current building that dates from this time. It was a very large church, as befitted the size of the parish, which was far more extensive than it is today, including what is now Wychbold and Elmbridge. One of the medieval rectors was Thomas Cantilupe, who held it among many other livings, and later became Bishop of Hereford. He was later canonised as St Thomas of Hereford. In this period there was also a hospital near the church, and the monks who ran it worshipped in St Augustine's.

After the dissolution of the monasteries the living passed into private hands, and the churchyard was used for all the town except those living around St Peter's. The comments of contemporaries suggest it was, as its position indicated, the dominant church of the area.Its location, however, was to bring disaster during the Civil War. In 1646AD Parliamentarians were billeted in it, and in the Royalist attack the church was fired, and exploding armaments destroyed the nave and south transept, and severely damaged the rest of the building.In the early 18th century, the tower and south transept were rebuilt, using the masonry from the damaged building, but the tower was now located over, and as part of, the south transept. The building retains this extremely unusual T-shape and positioning of the tower today. Various internal decorations and furnishings were added at this time, with more addictions being made as part of a late Victorian re-ordering, when new stained glass windows were added. The tower contains a fine peal of eight bells, and visiting groups often come to ring them.

The Worcester and Birmingham Canal is a canal linking Birmingham and Worcester in England. It starts in Worcester, as an 'offshoot' of the River Severn (just after the river lock) and ends in Gas Street Basin in Birmingham. It is 29 miles (47 km) long. There are 58 locks in total on the canal, including the 30 Tardebigge Locks, one of the largest lock flights in Europe. The canal climbs 428 feet (130 m) from Worcester to Birmingham. The parliamentary bill permitting its construction was passed in 1791 empowering the company to raise £180,000 (equivalent to £21.3 million in 2018),[1] through 1,800 shares at a cost of £100 each. It also allowed them to raise a further £70,000, if needed, amongst themselves or by the mortgage of tolls and rates. The Act also permitted the company to allow landowners on the line to build wharfs and wharfhouse, and if they refuse to, the company are allowed to if needed. A further Act of Parliament authorised the raising of £149,929 amongst themselves or through the creation of new shares. However, the company were unable to raise the full amount of money authorised by the second Act, and so another was passed allowing them to raise £49,680. Another Act was passed to obtain more money in 1808. This Act empowered the company to raise £168,000 through the creation of 4,200 shares at £40 each. A final Act was passed in 1815 after the company had purchased land for reservoirs, which was not permitted in the previous Acts. The Act permitted the company to sell the land and to pay a debt of £29,096 (equivalent to £2,120,000 in 2018), to the treasurers by 29 September 1815 as well, otherwise it would be taken out of the proceeds raised from selling the land.

The canal was surveyed by Josiah Clowes and John Snape. Its engineers changed often, and included Thomas Cartwright, John Woodhouse and William Crosley. Construction of a barge-width (14 ft) canal began in 1792 from the Birmingham end, but progressed slowly. Selly Oak was reached in October 1795 and Kings Norton Junction by May 1796, meeting the new Stratford-upon-Avon Canal which had by then reached Hockley Heath. By March 1797 the 2726 yard (2493 m) Wast Hills Tunnel was open and the canal was trading to Hopwood. In 1807 the canal reached Tardebigge without the use of locks. From Worcester Bar to Tardebigge top lock, the canal is at the 453 ft Birmingham Level. The cost of building 14-foot (4.3 m) locks was too great so the 56 locks down to Worcester were built to the narrow 7-foot (2.1 m) specification, with the final two locks connecting to the Severn in Worcester being 14-foot (4.3 m) to allow river craft access to Diglis Basin.

The final 16 miles (26 km) was opened in December 1815. Plans to construct basins at Lowesmoor and Diglis were carried out eventually.

The Dudley Canal Line No 2 was built through the Lapal Tunnel to meet the canal at Selly Oak in 1798. After repeated collapses, the tunnel was finally abandoned in 1917 leaving a short stretch navigable between Selly Oak and a brick works at California until 1953, after which it was drained and filled in. A campaign group, The Lapal Canal Trust, is working to restore it, with a diversion around the tunnel.

A major user of the canal was the Cadbury chocolate factories at Bournville and Blackpole, Worcester.