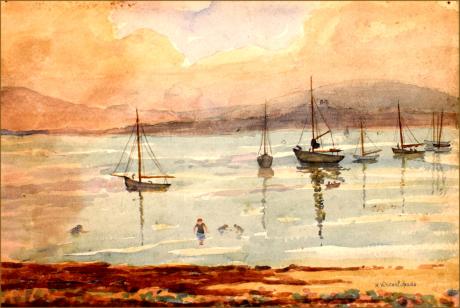 signed "A. Vincent Reade " and further inscribed and dated on the reverse "Yachts at Beaumaris / 1929"

Beaumaris is a community, and the former county town, of Anglesey, Wales, at the eastern entrance to the Menai Strait, the tidal waterway separating Anglesey from the coast of North Wales. At the 2011 census, its population was 1,938. Beaumaris was originally a Viking settlement known as Porth y Wygyr ("Port of the Vikings"),[2] but the town itself began its development in 1295 when Edward I of England, having conquered Wales, commissioned the building of Beaumaris Castle as part of a chain of fortifications around the North Wales coast (others include Conwy, Caernarfon and Harlech).

Notable buildings in the town include the castle, a courthouse built in 1614, the 14th-century St Mary's and St Nicholas's Church, Beaumaris Gaol, the 14th-century Tudor Rose (one of the oldest original timber-framed buildings in Britain) and the Bulls Head Inn, built in 1472, which General Thomas Mytton made his headquarters during the "Siege of Beaumaris" during the second English Civil War in 1648. The hill leading north from the town is named Red Hill from the blood spilled in that conflict.

A marina on the western shore of Gallows Point has been proposed, but at present all moorings at Beaumaris are tidal.

Lifeboat :
The first recorded rescue of people in difficulty at sea was in 1830 when 375 people were rescued from a foundered emigrant ship. A lifeboat station was established in 1891 and closed four years later when a neighbouring station was provided with a more powerful lifeboat. The station was reopened in 1914 and is operated by the RNLI.

Beaumaris is served by one primary school. Its 300-year-old grammar school moved to the nearby Menai Bridge in 1963 became the comprehensive Ysgol David Hughes.