Of Bohemian origin, Johan Zoffany was born Johannes Josephus Zaufallij in Frankfurt on 13 March 1733. He undertook an initial period of study in a sculptor's workshop in Ellwangen in the 1740s (possibly at the workshop of sculptor Melchior Paulus) and later at Regensburg with the artist Martin Speer. In 1750, he travelled to Rome, entering the studio of Agostino Masucci. In autumn 1760 he arrived in England, initially finding work with the clockmaker Stephen Rimbault (Zoffany's fine portrait of whom is now in the Tate Gallery), painting vignettes for his clocks. By 1764 he was enjoying the patronage of the royal family, King George III and Queen Charlotte, for his charmingly informal scenes such as Queen Charlotte and Her Two Eldest Children (1765), in which the queen is shown at her toilette, with her eldest children, inside Buckingham House, and another, outdoors, with her children and her brothers. He also was popular with the Austrian Imperial family and in 1776 was created 'Baron' by the Empress Maria Theresa. 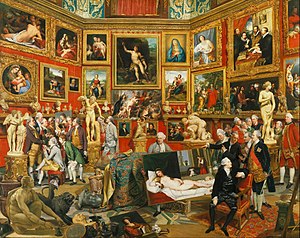 The Tribuna of the Uffizi, by Johan Zoffany, 1772-8, Royal Collection, Windsor

Johann Zoffany was a Freemason and was initiated into the Craft on 19 December 1763 at The Old King's Lodge No 28.

A founding member of the new Royal Academy in 1769, Zoffany enjoyed great popularity for his society and theatrical portraits, painting many prominent actors and actresses, in particular David Garrick, the most famous actor of his day – Garrick as Hamlet and Garrick asKing Lear – often in costume. He was a master of what has been called the 'theatrical conversation piece', a sub-set of the 'conversation piece' genre that arose with the middle classes in the 18th century. (The conversation piece – or conversazione – was a relatively small, though not necessarily inexpensive, informal group portrait, often of a family group or a circle of friends. This genre developed in the Netherlands and France and became popular in Britain from about 1720.) Zoffany has been described by one critic as 'the real creator and master of this genre' and 'a thoroughly bad painter' simultaneously which rather denigrates this genre.

In the later part of his life, Zoffany was especially known for producing huge paintings with large casts of people and works of art, all readily recognizable by their contemporaries. In paintings like "The Tribuna of the Uffizi" he carried this fidelity to an extreme degree: theTribuna was already displayed in the typically cluttered 18th-century manner (i.e., with many objects hanging in a small area, stacked many paintings high on the wall), but Zoffany added to the sense of clutter by having other works brought into the small octagonal gallery space from other parts of the Uffizi.

Though Zoffany made several visits to continental Europe and India in his lifetime, he remained in Britain, dying at his home at Strand-on-the-Green, 11 November 1810. He is buried in the churchyard of St Anne's Church, Kew. The painter Thomas Gainsborough was, by that artist's own request, later buried nearby